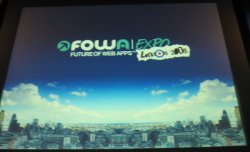 I attended two great sessions at day two of FOWA London on Friday – which I guess makes it a good day. The first was from Tim Bray, about which I posted last week. Bray was alone in suggesting that the current economic climate will change the tech world deeply; it’s speculative, but I’m inclined to agree with him, though not on every detail of his analysis. He says recession will boost open source – it might, though I can also imagine companies cutting back on the number of staff they dedicate to open source projects like Eclipse – a large amount of open source development is done by professionals on company time. I asked Bray how he thought Sun (his company) would fare in the downturn; he said it would be better off than software companies which are not committed to the open source model, but again that’s speculative; what will be tested is the business model, and that is one thing Sun has never been able to explain satisfactorily.

I was amused that Tim Bray sneaked “Flash is bad” into his talk, as well as talking about “the Microsoft disaster” and “the Oracle disaster”.

The other high point was Kathy Sierra doing her piece on passionate users; I guess it is what she always says, but none the worse for that, especially as I had not heard here speak before. I’ll be posting again on this, here or elsewhere. I was sorry that her talk came just before the Diggnation silliness which meant no chance for questions.

There were disappointments too. Mark Zuckerberg and Dave Morin spoke about Facebook Connect and a few other things; I would have liked some sort of debate about Connect vs Google’s OpenSocial; my observation is that Google is doing a better PR job in persuading us that it supports the “open web” as opposed to some kind of walled garden.

Although I have an intense interest in things like Adobe AIR, Salesforce.com, and Amazon’s web services, the sessions on these were disappointing to me, being high level and mainly marketing. There was probably more detail in the “University” mini-sessions but one cannot attend everything.

Despite its absence from the main stage, there seemed to be a fair amount of interest in Microsoft’s stand and mini-sessions on Silverlight; nevertheless, if the fowa crowd is wary of Flash it is even more suspicious of anything from Microsoft. Fowa is biased towards open technology; only Apple gets a pass because its laptops and iPhone are well liked.

As for significant clues about, well, the future of web applications, I’d point to David Recordon’s session on the “Open Stack”, about which I posted on Friday. If this, or something like it, wins serious adoption it will have a huge impact.

Many of the sessions have been posted as videos here.