Yesterday, Bob Dylan was awarded the Nobel Prize for Literature. 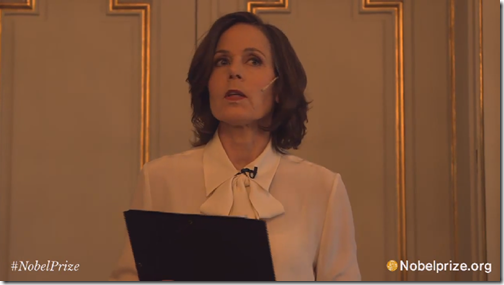 The reason stated was “for having created new poetic expressions within the great American song tradition”.

Of course I am delighted, as a long-time Dylan fan. I am not quite his generation, I was too young to take in what was happening in the sixties, but I was there for the release of Blood on the Tracks in 1974, among his best releases. In fact not having much money at the time, I won my copy from the local paper in a competition. 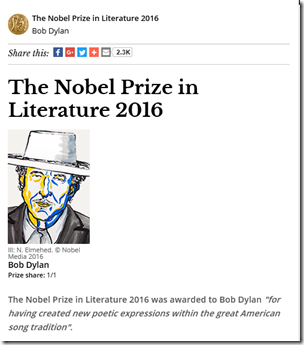 I cannot therefore be objective about this award (and you can debate whether objectivity in literary criticism exists), but I do have some reflections.

First, this feels like some sort of establishment recognition that superlative literature has emerged from the popular music of my generation. In one sense Dylan stands as representative among others who could plausibly have been given this award, most obviously Leonard Cohen – who was a poet before he was a songwriter – but also Joni Mitchell and perhaps others, Paul Simon, David Bowie, Paul McCartney, Bruce Springsteen, Van Morrison, Ray Davies, Tom Waits, Jackson Browne, Elvis Costello, and I am sure you can add to this list.

That said, Dylan is both like and unlike others in this kind of list. Again, I cannot be objective, but it has always seems to me that Dylan’s ability to reinvent language, to innovate with words, is something that sets him apart. There are many examples; one that comes to mind is in Jokerman, where Dylan sings of:

On a quick read this looks clichéd: judges spinning words, night stepping in. Then you look more closely. The judges are spinning webs, not words, and they are then caught like flies in the webs of their own making. It is a powerful image, and packs two meanings of “spin”, words and webs, into one thought.

And what about night stepping in, what is that about? It sounds like a cliché, but has anyone else used that image? And you can muse about the meaning of “stepping in”; does it mean imposing authority, like a teacher or policeman or God “stepping in”; or is it stepping in like a dancer, a beautiful, natural restoration of order?

There is no answer to these questions, but you can say that Dylan’s work, at its best, rewards study and reflection in a way that few can match.

Christopher Ricks, a Dylan critic with impeccable credentials (Professor of English at Bristol, Cambridge and now Boston University), is happy to make the comparison with Shakespeare:

I believe the award to be merited then. I also acknowledge though that Dylan does not fit the norms of great writers. He is instinctive; he says he writes quickly, and it seems that he does not curate his own output with the care that characterises most poets.

There is also the awkward question of what the words mean, in many of his songs, and whether that matters. Trying to puzzle out meanings is part of the fun, but also gets you lost in a maze, wondering if Dylan is having some kind of joke at your expense.

In Tangled up in Blue, a woman:

Which poet? Dante? Petrach (actually 14th century)? Dylan once told Craig McGregor it was Plutarch perhaps meaning Petrach? Then again he sometimes seems to sing “from the fifteenth century”. And often he changes the words completely, mentioning Charles Baudelaire, or the Bible, with various references from Jeremiah. And in London on 25 Oct 2015 he sang:

she opened up a book of poems and she said them to me slow, you know
memorise these lines and remember these rhymes
when you’re out there walking to and fro
Every one of those words rang true and glowed like burning coals
pouring off of every page like it was written in my soul from me to you

We can conclude I think that Dylan did not care much about which book it was, or which poet. He cares more about the lines beginning “Every one of those words rang true”, which he uses in most variants, though many performances omit the verse entirely.

I mention this to show that Dylan is a slippery subject, and as a warning to anyone who purchases a book of his lyrics that they are not reading the whole story. In some cases, the printed lyrics are simply wrong, as in these words from Subterranean Homesick Blues:

The lyric is actually “Don’t tie no bows” and we have evidence:

It is true that one of the cards in the famous video for the song says No Dose: 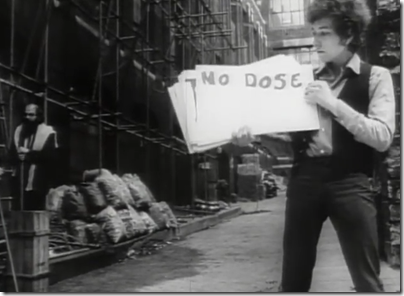 but those cards are a humorous counterpoint to the words, not a transcription of the lyrics, and probably written by Allen Ginsberg (the man on the left in the video) rather than Dylan.

Incidentally, the lack of any reference to “don’t tie no bows” is why I cancelled my order for the very expensive edition of the Lyrics since 1962, supposedly giving variations, published in 2014 and edited by Ricks and Lisa Nemrow. Someone needs to do a much better job, encompassing live performances as well as released albums.

You never know then when Dylan is playing with you, or just being careless, and sometimes he just throws words together in evocative ways and the search for explicit meaning is unrewarding.

I encourage anybody who has not done so to explore the work of Bob Dylan, though recognising that it is not for everyone, and some cannot get through the “voice like sand and glue”, as David Bowie put it.

The Nobel prize is deserved, but it is a curious body of work, and it will be a long time before we can get anything like a true perspective on it.

For me that does not matter; I am happy to enjoy it. 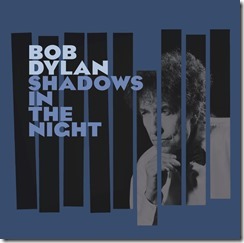 Dylan is a man of many moods. If you are looking for Dylan the folk singer, Dylan the prophet, Dylan the protestor, or the electric Dylan of Highway 61 revisited, you may not find this album to your taste. Instead, we are transported to the fifties, Frank Sinatra and the pensive small hours of the morning. Dylan is soulful and languid, singing standards from another era, songs of autumn, songs of night. The music is melodic, slow and recessed; the mood is reflective, the voice is tour-weary but tuneful (for Dylan) and articulate; Dylan has taken a lot of care with this album, nothing is thrown away, nothing breaks the mood, and the lyrics are full of meaning; even though others wrote them down, he makes them his own.

These are the songs of a man who has been everywhere, done everything, and has nothing left to prove. It feels like he is singing for himself and allowing us the privilege of listening in. Sometimes he is confessional; “I know I have sinned, I go seeking shelter and I cry in the wind,” he sings in Stay with Me; and “Show me that river, take me across and wash all my troubles away” in a magnificent performance of Lucky old Sun at the close. These are songs of yearning; “if my one wish comes true, my empty arms will be filled with you” he croons in Full Moon and Empty Arms.

As a Dylan fan of many years, and one lucky enough to have seen him perform on many occasions, I love the album. It is different but not different; as ever, he follows his artistic instinct, never mind what others think. “Let people wonder, let ‘em laugh, let ‘em frown …. don’t you remember I was always your clown, why try to change me now?” he sings.

Thank you Bob for giving us an enchanted evening.

I played this last night; for some reason the words just bowled me over.

The final verse is I think the most extraordinary:

Then take me disappearin’ through the smoke rings of my mind
Down the foggy ruins of time, far past the frozen leaves
The haunted, frightened trees, out to the windy beach
Far from the twisted reach of crazy sorrow
Yes, to dance beneath the diamond sky with one hand waving free
Silhouetted by the sea, circled by the circus sands
With all memory and fate driven deep beneath the waves
Let me forget about today until tomorrow

What is it about? It is about escape I suppose, a dream of freedom from this world of “crazy sorrow”. It is also about music as a gateway to another world. It is a spiritual song; we escape what is frozen and haunted and we arrive on the beach alongside the infinite sea. And then, brilliantly, a reminder that cold reality will return tomorrow.

Dylan’s gift is to come up with phrases that sound both striking and familiar – “the foggy ruins of time” – and yet, did anyone before put those words together in that order? I doubt it. Yet these phrases come tumbling out: “the jingle jangle morning”, “skippin’ reels of rhyme”, “to dance beneath the diamond sky”. You could write an entire song based on just one of these.

When I think of the song, two images come to mind. One is Dylan himself singing it; I was fortunate to hear him perform this at Brixton Academy in 1995. Another is a busker, any busker, sitting in the street strumming and singing this song as a way to transport himself and every passer by to a better place.

Note: all the words are here.