At TechEd this week, Microsoft announced Apache Cordova support in Visual Studio 2013. A Cordova app is HTML and JavaScript wrapped as a native app, with support for multiple platforms including iOS and Android. It is the open source part of Adobe’s PhoneGap product. I downloaded the preview from here and took a quick look.

There is a long list of dependencies which the preview offers to install on your behalf: 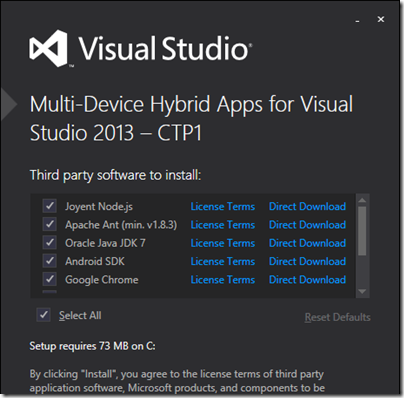 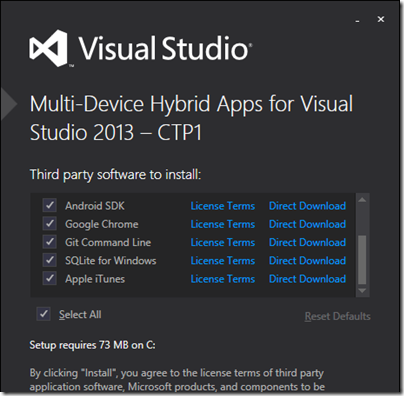 The list includes the Java SDK, Google Chrome and Apple iTunes. The documentation explains that Java is required for the Android build process, Chrome is required to run the Ripple emulator (so you could choose not to install if you do not require Ripple), and iTunes is required for deploying an app to an iOS device, though a Mac is also required.

The license terms for both Chrome and iTunes are long and onerous, plus iTunes is on my list of applications not to install on Windows if you want it to run fast. Chrome is already installed on my PC, and I unchecked iTunes.

Next, I ran Visual Studio and selected a Multi-Device Hybrid App project (I guess “Cordova app” was rejected as being too short and simple).

An annoyance is that if you use the default project location, it is incompatible because of spaces in the path:

The project opened, and being impatient I immediately hit Run.

When you build, and debug using the default Ripple emulator (which runs in Chrome, hence the dependency), Visual Studio grabs a ton of dependencies. 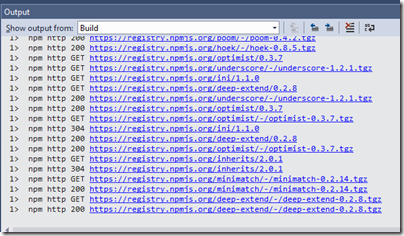 and eventually the app runs: 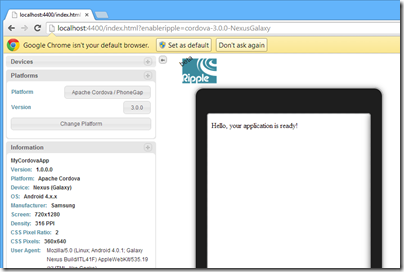 or you can debug in the Android emulator:

Microsoft has some sample projects for AngularJS, BackboneJS and WinJS. This last is intriguing since you could emulate the Windows Phone look and feel (or something like it) on Android on iOS, though it would look far from native.

The preview is not feature-complete. The only supported device targets are Android 4.x, IOS 6 and 7, Windows 8.x Store apps, and Windows Phone 8.x. Windows Phone debugging does not work in this preview. 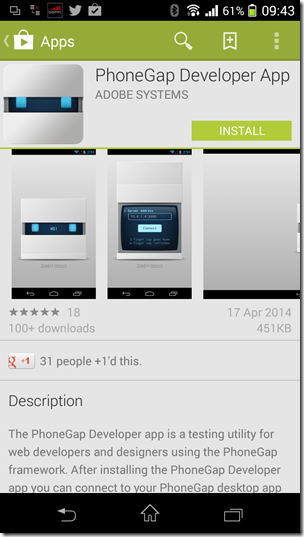 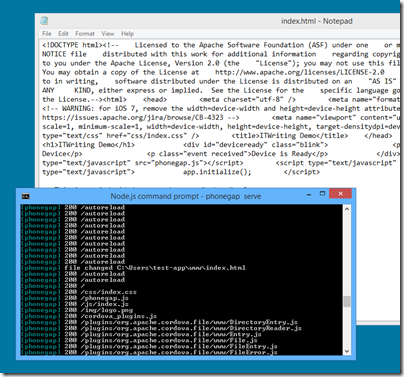 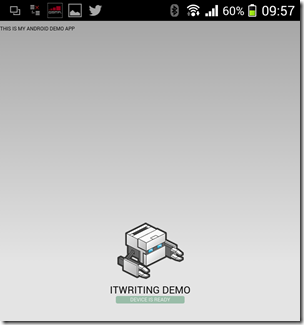 Today at its Software Conference in Paris Intel presented its HTML5 development tools. 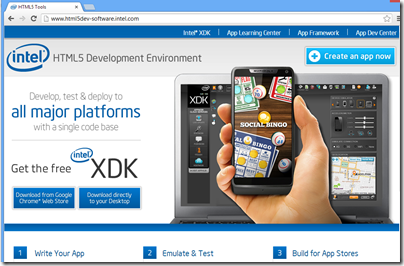 There are several components, starting with the XDK, a cross-platform development kit based on HTML5, CSS and JavaScript designed to be packaged as mobile apps using Cordova, the open source variant of PhoneGap.

The XDK is fully compatible with the PhoneGap HTML5 cross platform development project, providing many features that are missing from the open source project.

PhoneGap is Adobe’s commercial variant of Cordova. It looks as if Intel is doing its own implementation of features which are in PhoneGap but not Cordova, which might not please Adobe. Apparently code that Intel adds will be fed back into Cordova in due course.

Intel has its own JavaScript app framework, formerly called jqMobi and now called Intel’s App Framework. This is an open source framework hosted on Github.

There are also developer tools which run as an extension to Google Chrome, and a cloud-based build service which targets the following platforms:

The build service lets you compile and deploy for these platforms without requiring a local install of the various mobile SDKs. It is free and according to Intel’s Thomas Zipplies there are no plans to charge in future. The build service is Intel’s own, and not related to Adobe’s PhoneGap Build, other than the fact that both share common source in Cordova. This also is unlikely to please Adobe.

You can start a new app in the browser, using a wizard. 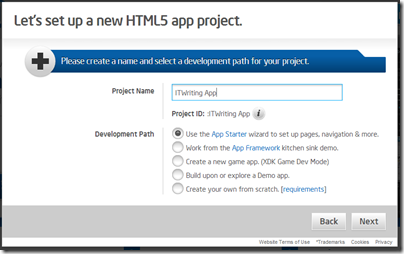 Intel also has an iOS to HTML5 porting tool in beta, called the App Porter Tool. The aim is to convert Objective C to JavaScript automatically, and while the tool will not convert all the code successfully it should be able to port most of it, reducing the overall porting effort.

Given that the XDK supports Windows 8 modern apps and Windows Phone 8, this is also a route to porting from iOS to those platforms.

Why is Intel doing this, especially on a non-commercial basis? According to Zipplies, it is a reaction to “walled garden” development platforms, which while not specified must include Apple iOS and to some extent Google Android.

Note that both iOS and almost all Android devices run on ARM, so another way of looking at this is that Intel would rather have developers work on cross-platform apps than have them develop exclusively for ARM devices.

Zipplies also says that Intel can optimise the libraries in the XDK to improve performance on its processors.

Adobe has released PhoneGap 2.0, its framework for creating cross-platform mobile apps using HTML and JavaScript. Using PhoneGap, you can wrap a web application as a native app, taking advantage of the browser control available in all the major mobile platforms.

New features in PhoneGap 2.0 include Windows Phone support, WebView which lets you embed a PhoneGap fragment into a larger native application, improved tooling and a unified JavaScript API across all platforms called Cordova-JS.

The Mac tooling has been improved and no longer depends on Xcode templates. Instead, you create a new project at the command line. However, you do need Lion or Mountain Lion to use PhoneGap.

The associated Apache Cordova project is “nearing graduation from incubation”, according to Adobe’s release.

The hot cross-platform mobile toolkit PhoneGap was created by Nitobi, a company acquired by Adobe last year. Almost at the same time, the project was submitted to Apache as an open source project. However, the Apache project is not called PhoneGap; it was briefly known as Callback and is now called Cordova (the name of the street in Vancouver where Nitobi was based).

A new official log post explains why PhoneGap was renamed at Apache, but also makes the point that the PhoneGap brand will continue.

Over time, the PhoneGap distribution may contain additional tools that tie into other Adobe services, which would not be appropriate for an Apache project. For example, PhoneGap Build and Adobe Shadow together make a whole lot of strategic sense. PhoneGap will always remain free, open source software and will always be a free distribution of Apache Cordova.

Read it carefully, because it is still potentially confusing. Note that PhoneGap “will always remain free, open source software” though it may gain hooks into commercial Adobe tools. At least, that is how I read it.

I would also expect that Adobe will come up with design and development tools for which PhoneGap (or Cordova) is invisible to the user. You will just be able to build for multiple platforms.

Currently, the only difference is in the name of the download package and will remain so for some time.

I will add that there is great brand-awareness of PhoneGap and what it is, and little for Cordova, so if you want to be understood talk about PhoneGap.