I am a tad conflicted when it comes to vinyl records. On the one hand, I have not seen convincing scientific evidence, or a properly conducted blind test, that demonstrates any reason why record replay is superior to digital, while there is plenty of evidence for the reverse. On the other hand, I put on a well-mastered record, and it is like magic, I am transported into the music in a way that my digital sources rarely achieve. Plus the sleeves are beautiful, and in the case of older recordings, a sense that this is the real thing and subsequent formats mere copies (even if they do sound better). Finally, sometimes missing or damaged master tapes, or the bad habits of the recording industry in compressing CD audio so that it is uniformly LOUD, mean that records sometimes really do sound better, despite the limitations of the format.

If you like the sound of records but the convenience and security against damage that digital offers, you might want to rip them. I have done this but would not describe it as easy. You have to play the record in the closest to ideal conditions you can manage – clean record, no dust accumulated on the stylus, high quality turntable and phono stage – while also recording the output through an analogue to digital converter (ADC). Then when done, you have to break the result into separate tracks and tag it correctly. There is software to assist this whole process, like Channel D’s Pure Vinyl, but it is never that quick and easy. There is also the question of how much to tinker with the results in the hope of improving it, via click removal and the like. Personally I tend to the view that most things risk making the sound worse, but there is certainly a case for it, especially with particularly intrusive scratches.

Last week I went to a demo of Plato, a system for ripping vinyl combined with an all-in-one home media playback solution. It comes from the Derby-based company Convert Technologies, formerly known as Entotem. The company has also launched the Red Dot recording service, through which you can get them to rip vinyl or even CDs on your behalf. 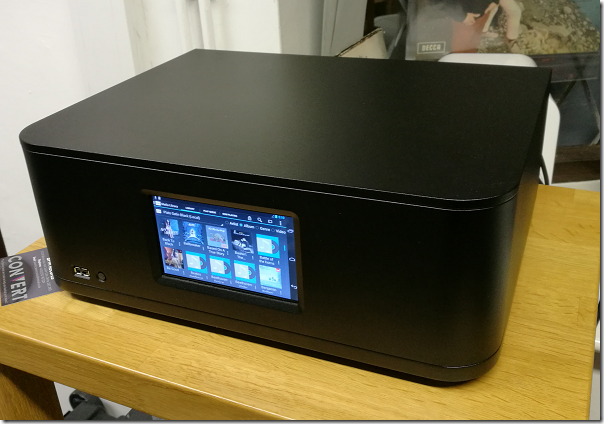 The company showed me its top of the range unit, which is an all-in-one box for storing digital media as well as playing it, and includes a power amplifier which delivers, they say, 25W Class A amplification or 50W Class B. The idea of Class A/B amplification is not new so I am not sure whether there is any secret sauce in the Plato design; however the company also offers a Class B version at a considerably lower price.

The system runs Android customised for the purpose, with a touch screen. There is also a controller app which works best on Android but is also available for Apple iOS with “approx 70% of the functionality”. It includes an ESS Sabre 32 DAC and ADC. Inside is a beefy toroidal tranformer powering the various boards. Around the back is a generous set of inputs and outputs, including MM/MC phono input, 3 additional line inputs, 1 coax and 3 optical digital inputs, 2 optical digital outputs, 1 HDMI output, and 3 USB 2.0 ports. 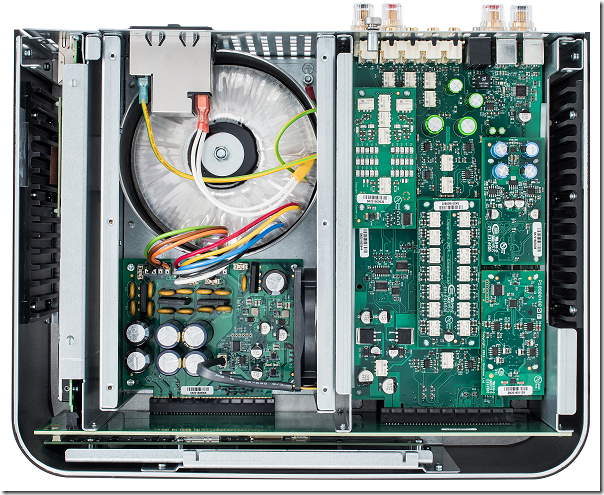 You can pay extra for SSD storage which is pretty pointless from a technical point of view (SSD is much faster, but a conventional hard drive easily fast enough for audio recordign and playback) but would lower the noise level slightly, though the fan is likely to be louder in any case.

Having all the controls functions driven by software enables plenty of features. You can change the phono input from moving coil to moving magnet, vary the capacitance and resistance,  and apply a rumble filter, for example.

Ripping vinyl is a matter of pressing a red button (hence the name of the ripping service). When the audio is played, there is an analogue chain for listening, I was told, but also a “parallel digital path” which captures a sample of the audio and sends it to Gracenote, an online tagging service, for recognition. If you are lucky, you will get the metadata and album artwork automatically retrieved. The system will also separate the tracks for you, taking most of the drudgery out of the ripping process.

The system does not attempt any click or noise reduction. “We have looked at it, because we write all the software, but most people said ‘don’t do it’,” said Pete Eason, Customer Experience Manager. “It’s not a priority”.

You can export the files to USB storage, so you could do your own additional processing if you wanted. However there is an annoyance: the agreement with Gracenote prohibits the export of the album art. So if you export your files for playback on a phone, for example, you don’t get the art. That’s irritating and there is talk of switching to another metadata supplier to fix it.

The system will stream music from attached USB storage, or over the network using UPnP. I am not a fan of UPnP because it seems less amenable to search, and less reliable, than other systems such as Logitech Media Server, but it should work OK. Internet radio is also provided, via the TuneIn service.

However you cannot access Plato’s storage directly over the network. This makes me wonder if Plato’s engineers would have been better off using Linux rather than Android for their embedded OS, as that would make this trivial to implement.

There is no support for Spotify Connect, which is a shame. You can of course stream to the unit from a phone or laptop using a device such as Google ChromeCast but that is not the same thing, since the quality and consistency of the signal is limited by your phone.

The Red Dot ripping service sounds good for those with plenty of money and little time, especially as it includes a cleaning service, but it is expensive at £10.00 per album and a minimum quantity of 25. Note you could buy the CD for less in many cases.

There is also a limitation in terms of the playback equipment used. It would be too expensive to use a true high-end cartridge and stylus. Red Dot uses “a really decent Pro-Ject Debut Carbon turntable and Ortofon stylus,” according to the FAQ, though they talked about other possible turntables, but always mid-range. That may not equal the equipment you have at home.

I got to ask some awkward questions. Why would anyone want to rip their vinyl, when with Spotify or Apple Music you could just play it from internet?

“There’s a quality issue there,” said marketing guy Ben Timberley. Eason added, “and also you can backup your vinyl. It’s always going to be a pristine original.”

Well, it will not always be a pristine original, but it will always be the same as when it was ripped.

I asked a hypothetical question. Let’s say I submit my rather beaten-up copy of David Bowie’s Ziggy Stardust, and as it happens Red Dot had just ripped someone else’s pristine copy of exactly the same album. Would they rip my scratched copy, or simply give me their existing rip? I would get my crackly one back, I was told. The other copy “belongs to someone else. We are sticking firmly on the side of the law on this one.”

I am not personally convinced that the law is so clear-cut. My records all say “unauthorised … copying of this record prohibited” and “all rights reserved”. On the one hand, there is the question of whether even personal format conversion of a record is strictly legal (though I cannot imagine anyone being pursued for it). On the other hand, since the record represents a personal license to enjoy that particular recording, I am not sure that whether you get back a copy of your record or someone else’s makes any difference.

Red Dot also offers to rip CDs, and here the argument seems even more ridiculous. Since ripping a CD with identical mastering results in an identical file, it would be absurd to re-rip when you already have the file in question. Are LPs any different, even though the imperfections of the format mean that every rip will vary slightly?

Next question: is there a paradox at the heart of this operation, which is that people who love records believe that the analogue chain sounds better than digital, so they are unlikely to want a digital copy? And if they do, why not just buy the digital version?

I got a somewhat garbled response. “That’s one argument but then this is essentially lossless, isn’t it?” said Eason. “You’re getting all the pops, the clicks, the whistles.”

“We’ve got the best DAC in the industry, which is the Sabre DAC,” added Timberley. “If you are going to convert it we’ve got the best piece of kit to do it.” Though I think he meant ADC rather than DAC.

I also suggested that retailers might prefer to buy their own Plato and offer a ripping service, rather than resell Red Dot. Dealers are “too busy” said Timberley, though they might look a a licensing restriction if it became an issue.

This is not a review and I have not had a chance to try this at home. If you seriously want to rip your vinyl (and I do think there could be good reasons, as I stated above, though hearing pristine pops and clicks is not one of them), then Plato looks like a convenient though expensive choice.

As an all-in-one hi-fi (just add speakers) Plato might also be good, though it looks expensive compared to, say, a NAS, a Raspberry Pi with a DAC, and a decent amplifier. It is hard to value these things without trying them out though.

In the end though, my instinct is that the best way to play records is to play records. I haven’t found record wear much of a problem, especially when you have a large collection.

So I am not sure that Plato is for me, though it does look nice and easy to use.