At Mobile World Congress Fulton Innovation was showing off its wireless power technology called eCoupled. We are accustomed to the idea of transmitting data wirelessly, but less familiar with wireless power. It is possible though, and I saw several examples. One of the most striking but least useful is this cereal box, printed with conductive ink, which lights up when placed on a special shelf – the inset image shows the same packet before the title lit up. 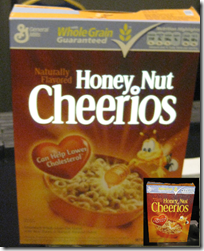 The technology has plenty of potential though. I travelled to Barcelona with a case full of chargers, and the idea of simply placing them on a charging shelf instead is compelling; this is already possible and I saw several examples. The Wireless Power Consortium has created a wireless power standard called Qi:

It will be no surprise to see Qi stations in the office, hotels, airports, railway stations as part of the normal infrastructure that offers wireless power charging service 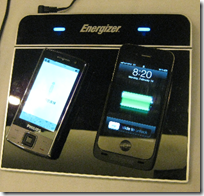 On the eCoupled site you can see some other ideas, like kitchen appliances that work simply by being placed on a powered surface:

eCoupled will one day integrate into the walls and surfaces of your home. If you’re watching the big game, the TV won’t need to be plugged in. Power will be delivered wirelessly via the eCoupled-enabled wall. In the kitchen, a multipurpose countertop will allow you to mix, chop, blend and boil all on the same powered surface. There will be no cords to plug in, or outlets to worry about.

The technology allows data transmission as well, so the glowing cereal box can also report when it has passed its sell-by date. Now that might actually serve a purpose.