A while back I worked on a Delphi wrapper for SQLite 3, which I published on this site as an open source project. Others amended it to support Free Pascal and Lazarus, so you can use it on Linux and on the Mac. I’ve not touched it for a couple of years; but recently received an email requesting support for the SQLite 3 backup API. There are only a few functions involved so I added them to the wrapper, and also updated the Sqlite DLL to version 3.7.5. 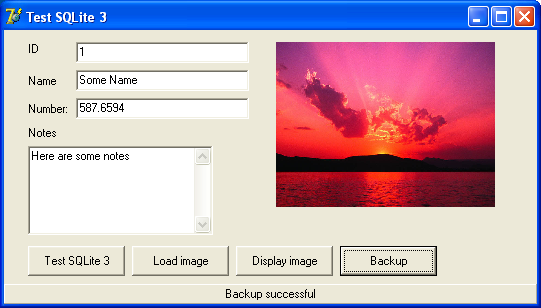 Although I used Delphi XE to work on the wrapper, I did the build for the repository with Delphi 7, running in a virtual machine, because I know this version still has plenty of use. The problem though is that Delphi 2009 introduced full Unicode support, causing compatibility issues. My wrapper is compromised because it uses the old AnsiString, so that it works with all Delphi versions. I have in mind to fix this so you get full Unicode support when I have time to do so.

There is no support for Delphi’s data binding, and the wrapper appeals to developers happy to code their own SQL. Of course it works like lightning.