Adobe’s forthcoming Creative Suite 5.5 includes a significant change to its audio editing support. The Soundbooth application has gone, replaced by a new version of Adobe Audition for both Mac and Windows. 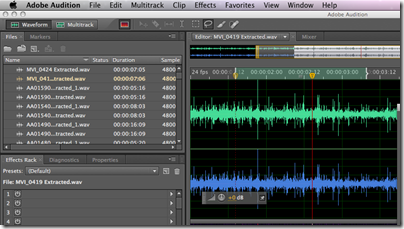 I thought this was good news. Audition has always been an excellent product, even back in the days when it was Cool Edit from Syntrillium – Adobe acquired Syntrillium’s technology in 2003. I found it difficult to understand why Adobe had two audio products, especially when Soundbooth is not as capable as Audition. Until now though, Audition was Windows-only, and Creative Suite is cross-platform for Mac and Windows.

Now Adobe’s Durin Gleaves has posted in detail about the history of Soundbooth and Audition. The rationale for Soundbooth was not that suite users required a simpler audio editor, as Adobe had told me previously, but rather that porting Audition was too difficult:

The Audition team looked at the 15 years of legacy Windows code and were not confident the application could be ported quickly enough to satisfy the CS release schedule. As an audio editor was necessary in the suite package, we created Soundbooth which was a simple audio editor built on top of Premiere Pro’s media playback engine. This enabled the team to provide value to the Suite, but the limitations of a playback engine crafted to handle large video files was not ideal for detailed audio production.

To Adobe’s credit, it did not give up on bringing Audition to Creative Suite but has spent two years re-writing Audition in cross-platform code:

So we’ve spent the past two years re-writing Audition from the ground-up, preserving or updating our core DSP, modernizing the code to take advantage of current hardware and operating system technology, and emphasizing increased productivity and speed with every feature.

says Gleaves. The new Audition is optimised for multi-core systems and makes full use of background processing to improve productivity. On the Mac it supports Core Audio and Apple AudioUnit effects, and on Windows ASIO, though there is no mention of WASAPI, the low-latency audio API in Windows Vista and Windows 7. Steinberg’s VST (Visual Studio Technology) is supported on both platforms.

It it is not all good news though. To some extent Audition in CS 5.5 is a new application, and not all the features of Audition 3 have made it across. Gleaves lists the following as features which are not in this version:

Most of these are likely to return in a future update.

While it is a shame to see missing features, it makes sense for Adobe to unify its audio development effort on a new and solid base.

One other thing I should mention. Soundbooth has a feature called Analyze Speech for which I had high hopes, as I frequently need to transcribe interviews, but in practice the results were disappointing. I suspect it may work reasonably when there is a script with which to match the audio. That does raise the question though: are there any features in Soundbooth that will be missed following the transition to Audition?