I use TalkTalk for broadband and landline – though I never signed up with TalkTalk, I signed up with a smaller provider that was taken over – and recently I have been plagued with calls from people claiming to be from TalkTalk, but who in fact have malicious intent. If I am busy I just put the phone down, but sometimes I chat with them for a while, to discover more about what they are trying to do.

Rather than write a long general piece about this problem, I thought the best approach would be a Q&A with answers to the best of my knowledge.

Why so many fake TalkTalk calls?

I have two landline numbers, and until recently only the non-TalkTalk number ever got called by scammers. This makes me think that the flood of TalkTalk calls is related to data stolen from the company, perhaps in October 215 or perhaps in subsequent attacks. Some victims report that scammers know their name and account number; in my case I don’t have any evidence for that. On a couple of occasions I have asked the caller to state my account number but they have given me a random number. However I do think that my telephone number is on a list of valid TalkTalk numbers that is circulating among these criminal companies.

How do I know if it is really TalkTalk?

My advice is to assume that is it not TalkTalk. If you think TalkTalk really wants to get in touch with you, put the phone down and call TalkTalk customer service, either from another number or after waiting 15 minutes to make sure that the person who called you has really terminated the call.

How does the caller know my Computer License ID?

A common part of these scripts is that the caller will show that he knows your “computer license ID” by guiding you to show it on your screen and then reading it to you. They do this by getting to you open a command window and type assoc: 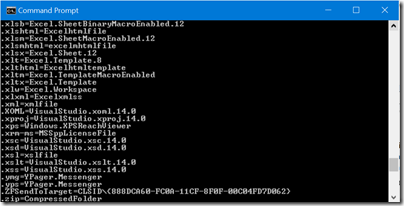 The way this works is simple. The number you see next to .ZFSendToTarget is not a license ID. The abbreviation stands for Class ID and it is part of the plumbing of Windows, the same on every Windows PC.

What about all the malware errors and warnings on my PC?

This is a core part of the fake TalkTalk (and fake Microsoft) script. Our server has picked up warning messages from your computer, they say, and they show you a list of them.

The way this works is that the scammer guides you to open a Windows utility called Event Viewer, usually via the Run dialog (type eventvwr). Then they get you to filter it to show “Administrative events” which filters the log to show only errors and warnings.

Now, you have to agree that the number of errors and warnings Windows manages to generate is remarkable. My PC has over 9,000: 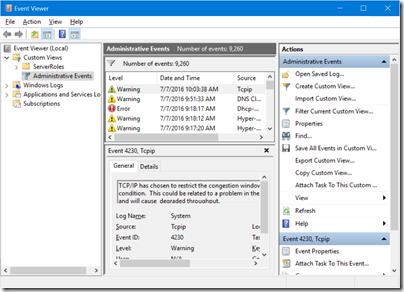 However, these messages are not generated by malware, nor are they broadcast to the world (or to TalkTalk servers). They are simply log entries generated by the operating system. If you have time on your hands, you can look up the reason for each one and even fix many of them; but in most cases they are just noise. Real malware, needless to say, does not make helpful logs of its activity but keeps quiet about it.

What does Fake TalkTalk really want to do?

Once your fake TalkTalk caller has persuaded you that something is wrong with your PC or router or internet connection, the next step is invariably to get remote access to your PC. They do this by guiding you to a website such as Ammyy or Logmein Rescue, and initiate a support session. These are legitimate services used by support engineers, but unfortunately if you allow someone untrustworthy to log onto your PC bad things will happen. Despite what the caller may tell you, these sessions are not just for messaging but enable the scammer to see your computer screen and even take over mouse and keyboard input.

Windows will generally warn you before you allow a remote session to start. You have to pass a dialog that says something like “Do you want to allow this app to make changes to your PC?” or similar. This warning is there for a reason! For sure say No if fake TalkTalk is on the line.

Note though that this remote control software is not in itself malware. Therefore you will see that the software that is trying to run is from a legitimate company. Unfortunately that will not protect you when someone who means you harm is at the other end of the connection.

OK, so Fake TalkTalk has a remote connection. What next?

Despite my interest in the goals of these scammers, I have never gone so far as to allow them to connect. There are ways to do this relatively safely, with an isolated virtual machine, but I have not gone that far. However I have seen reports from victims.

There is no single fake TalkTalk, but many organisations out there who do this impersonating. So the goals of these various organisations (and they are generally organisations rather than individuals) will vary.

A known scam is that the scammer will tell you a refund is due because of your slow internet connection. They show you that the sum has been paid, via a fake site, but oh dear, it is more than is due! For example, you are due £200 but have been paid £1200. Oops. Would you mind repaying the £1000 or I will be fired? So you send off £1000 but it turns out you were not paid any money at all.

Other possibilities are that your PC becomes part of a bot network, to be rented out to criminals for various purposes; or that the “engineer” finds such severe “problems” with your PC that you have to purchase their expensive anti-malware software or service; or your PC may be used to send out spam; or a small piece of software is installed that captures your keystrokes so your passwords will be sent to the scammer; or the scammer will search your documents for information they can use for identity theft.

Many possibilities, so for sure it is better not to let these scammers, or anyone you do not trust, to connect to your PC.

Who are the organisations behind Fake TalkTalk?

When I am called by TalkTalk impersonators, I notice several things. One is that the call quality is often poor, thanks to use of a cheap voice over IP connection from a far-off country. Second, I can hear many other calls taking place in the background, showing that these are not just individuals but organisations of some size. In fact, a common pattern is that three people are involved, one who initiates the call, a supervisor who makes the remote connection, and a third “engineer” who takes over once the connection is made.

One thing you can be sure of is that the are not in the UK. In fact, all the calls I have had seem to originate from outside Europe. This means of course that they are outside the scope of our regulators and difficult for police or fraud investigators to track down.

If you ask one of these callers where they are calling from, they often say they are in London. You can have some fun by asking questions like “what is the weather like in London?” or “what is the nearest tube station?”, they probably have no idea.

What is being done about this problem?

Good question. I have reported all my calls to TalkTalk, as well as using “Report abuse” forms on LogMeIn with the PIN numbers used by the criminals. On one occasion I had a scammer’s Google email address given to me; there is no way I can find to report this to Google which perhaps shows the limits of how much the company cares about our security.

I am not optimistic then that much of substance is being done or can be done. Addressing the problem at source means visiting the country where the scam is based and working with local law enforcement; even if that worked, other organisations in other countries soon pop up.

That means, for the moment, that education and warning is essential, imperfect though it is. TalkTalk, it seems to me, could do much better. Have they contacted all their customers will information and warnings? I don’t believe so. It is worried, perhaps, more about its reputation than the security of its customers.