I have signed up for a trial of the Tidal subscription service and have been listening to a few of the MQA-encoded albums that are available. You can find a list here. Most of the albums are from Warner, which is in the process of MQA-encoding all of its catalogue.

From my point of view, having familiar material available to test is a huge advantage. Previous MQA samples have all sounded good, but with no point of reference it is hard to draw conclusions about the value of the technology.

I have used both the software decoding available in the Tidal desktop app (running on Windows), and the external Meridian Explorer 2 DAC which is an affordable solution if you want something approaching the full MQA experience.

Note that on Windows you have to set Exclusive mode for MQA to work correctly. When using an MQA-capable DAC, you should also set Passthrough MQA. The Explorer 2 has a blue light which shows when MQA is on and working. 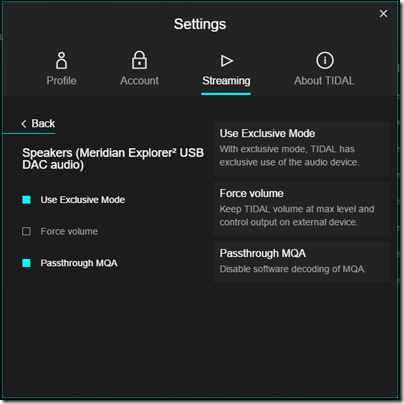 For these tests, I used the Talking Heads album Remain in Light, which I know well.

The Tidal master is different from any of my CDs. Here is the song Born under Punches in Adobe Audition (after analogue capture):

Here is my remastered CD:

This is pretty ugly; it’s compressed for extra loudness at the expense of dynamic range.

Here is my older CD:

This is nicely done in terms of dynamic range, which is why some seek out older masterings, despite perhaps using inferior source tapes or ADC.

This image shows three variants of the track streamed by Tidal and captured via ADC into a digital recorder at 24-bit/96 kHz. 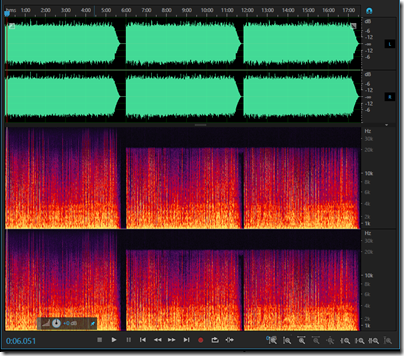 The first is the track with full MQA enabled and decoded by the Explorer 2. The second is the “Hi-Fi” version as delivered by Tidal, essentially CD quality. The third is the “Master” version, in other words the same source as the first, but with Exclusive mode turned off in Tidal, which prevents MQA from working.

Do they sound different though, bearing in mind that we cannot hear much above 20 kHz at best, and less than that as we age? I have been round this hi-res loop many times and concluded that for most of us there is not much benefit to hi-res as a delivery format. See here for some tests, for example.

MQA is not just extended frequency response though; it also claims to fix timing issues. However my captured samples are not really MQA; they are the output from MQA after a further ADC step. Of course this is not optimal but the alternative is to capture the digital output, which I am not set up to do.

An interesting question is whether the captured MQA output, after a second ADC/DAC conversion, can easily be distinguished from the direct MQA output. My subjective impression is, maybe. The first 30 seconds of Born Under Punches is a sort of collage of sounds including some vocal whoops, before David Byrne starts singing. What I notice listening to the Tidal stream with MQA enabled is that the different instruments sound more distinct from each other making the music more three-dimensional and dramatic. The vocals sound more natural. It is the best I have heard this track.

That said, I have not yet been able to set up any sort of blind test between the true MQA stream and my copy, which would be interesting, since what I have captured is plain old PCM.

There is a key point to note though, which is that mastering offered by Tidal is better than any of the CD versions I have heard; the old Eighties mastering is more dynamic but sounds harsher to my ears.

With or without MQA; you might want to subscribe to Tidal just to get these superior digital transfers.

Update: it seems that the Tidal stream for Remain in Light (both MQA and Hi-Fi) is a different mix, possibly a fold-down from the 5.1 release. So it is not surprising that it sounds different from the CD. The question of whether the MQA decoded version sounds different still applies though.