I recall seeing conversations on Twitter about whether it is worth going to conferences, especially vendor-led ones such as Microsoft’s Mix10 which took place earlier this month. It’s expensive, it’s marketing, and many of the sessions are available for free online soon after they take place.

In that context it’s interesting to see some off-the-cuff comments from attendees about what they liked at Mix. Networking comes high on the list, something you cannot get from a distance. There is general boredom with slide-driven presentations, and enthusiasm for interactive panels. One attendee says:

I always find the panels more exciting, and I like the open dialogs where people can ask questions and get real world opinion and advice

As for the content, the name that comes up most often is Bill Buxton, the design expert who joined Microsoft specifically to introduce greater design-consciousness into a company whose track record in this respect is poor. It was a fascinating appointment, and I believe you can see traces of his work in Windows 7 and much more in Windows Phone 7. I talked to Buxton briefly about this and wrote it up here. When I say “his work”, I don’t mean hands-on screen designs, rather a different approach to product development.

Buxton apparently made a considerable impression at Mix10. His session An hour with Bill Buxton (the link has the video) is also one that is interactive, and worth watching if you have an interest in where design fits into the development process. The fact that Microsoft-platform developers are engaging with his ideas is encouraging, given the usability issues that spoil so many Windows applications and machines.

Overall it also seems that Windows Phone 7 went down well – remarkable when you consider that Windows Mobile was all-but dismissed as irrelevant a few months ago – though I did smile at the Microsoft employee (I think) who shows an iPhone with a Mix scheduling app installed. Its special feature: shake the iPhone and it displays a Windows Phone 7 screen, handy if Ballmer appears in the corridor: 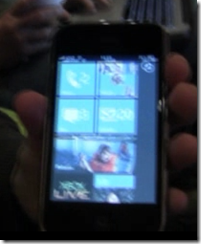 One final point: an attendee says IronRuby was shown running on Windows Phone 7 in one of the sessions, something I was told elsewhere was not possible.