Apple has announced the iPad – essentially a large-size (242.8 x 189.7mm) iTouch. Large multi-touch screen, claimed 10 hour battery life, flash drive of 16GB up to 32GB, browse the web, play music and video, read eBooks. Keyboard dock for the desk, virtual keyboard for when you are out and about. App Store support and runs iPhone apps. 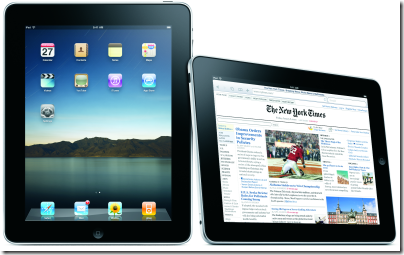 Here’s my instant reaction with a few pros and cons.

The design looks great, as you’d expect from Apple, and I’m a fan of the tablet concept. I wrote a piece on the subject back in 2003 when it still looked possible that the Windows tablet would take off. I think laptops are too big and bulky, and that the clamshell keyboard idea is desperately awkward when you are travelling. Ever tried to use a laptop while eating a meal, flying economy, for example? Or quickly fire up your laptop to get an address from an email, while walking down the street? It’s a horrible experience and the tablet concept is much better in these scenarios.

I also think that Microsoft’s big mistake with Tablet PC was requiring a stylus. Styluses are horrible, expensive, easily lost, and destroy much of the advantage of having a tablet. They are fine of course as an optional input mechanism, for writing or drawing, but not as a required item. Our fingers are capable of fine control on their own.

Apple’s device wins here; plus it has a UI designed for multi-touch, rather than a desktop UI with pen input bolted on top. The same will be true of the apps.

All good reasons then why iPad will succeed. And it will.

Still, I have reservations. When I travel, I need a mobile phone, for voice and all the other things smartphones are good at; and I need a laptop for all the things laptops are good at: email, word processing, spreadsheets, web browsing, custom apps and so on.

However, I will be reluctant to carry three devices with overlapping features, so for the iPad to work for me, I will need to ditch the laptop. Otherwise I’ll leave it behind, use it a little round the house, but eventually wonder why I bought it in the first place.

Thus, the critical question for iPad is this: to what extent can it enable me to leave the laptop behind? A lot will depend on the usability of iWork, the virtual keyboard and so on.

A related issue is the extent to which the device is locked down. I’m not 100% clear about this, but my impression is that the only way to get apps onto the iPad is via App Store. You can get music on via iTunes, and pictures via a USB adapter designed for cameras, and there must be a way to transfer documents via iTunes, but I’m guessing these go into some secure area which cannot execute applications – though no doubt there will be hacks to get round this. In this respect the model seems to be the same as iPhone and iTouch, and different from the Mac. Another factor is the relatively limited storage space.

This aspect is an annoyance – unless you change gear and think of it as a web client. Let’s say I wanted to get my custom database app onto the iPad. Maybe I could do that with the SDK; but better still, why not write it as a web app? Add a bit of offline capability and it could be just about perfect.

In other words, if I can truly get the web habit, so that all the stuff that matters to me is available online, then I can leave the laptop at home and just take out an iPad.

Or indeed Google Chrome OS. From what we’ve heard so far, Google’s devices will also be locked down, and unlike the iPad you will not even be able to install apps from an app store or save music and video locally – though who knows, maybe that could change, when people complain about how useless it is on a train or aeroplane. And like Gizmodo I reckon Google should make a Chrome OS tablet.

I’m beginning to think that Apple could have the high-end tablet market, and Google the low-end, because it’s safe to say that a Chrome OS device will be cheaper.

Microsoft will do its own iPad-like multi-touch device in around 2013, judging by how long it has taken to do Windows Mobile 7 following the launch of iPhone in 2007.

See also: Battle of the portables: Netbook vs Apple iPad 2.