Or should that be Metro-style apps? or Modern UI apps? or Windows Store apps?

I am not sure; but one thing jumps out at me as I look at the Windows 8 development platform. Microsoft is doing all it can to push developers towards Windows Runtime (WinRT) rather than desktop development.

Here is a small piece of evidence. The contentious new Start screen uses tiles for application shortcuts. These can be static images and text, or live tiles that update with current information. There is only one Start screen though, so desktop apps also have tiles which you click or tap to launch the app in question.

However, there is no documented way for desktop apps to have good-looking tiles. Here is the tile for Excel 2013, for example: 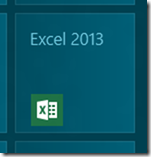 It is mostly wasted space. A WinRT app on the other hand can fill that space: 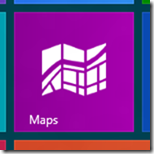 or display a picture

or take up a double space

The question: how difficult would it have been for Microsoft to allow desktop apps to have pretty tiles? I can understand why desktop apps cannot have live tiles, but there is no technical reason I can think of why desktop apps could not have a resource used for a decent tile.

Here is the official answer though, from Microsoft’s Rob Caplan:

Desktop apps cannot customize their tiles and will always use the icon and name from their shortcut.

I guess Microsoft can argue that it wants users to know whether they are about to launch a desktop app or a WinRT app. This could easily be done with a little overlay signifying the desktop. There was no need to ensure that all tiles for desktop apps look ugly.

Except that Microsoft wants these tiles to look ugly. Because it wants you to develop WinRT apps, not desktop apps, and is even willing to have its own Office tiles look bad for the sake of the cause.

This post was picked up by Reddit and of course there are some interesting comments. First, the desktop tiles are improved in the RTM build of Windows 8 (my screenshot above is from the Release Preview):

Second, here is a comment apparently from a Microsoft employee:

Wow, what a flimsy argument. The funniest thing about it, though, is that the desktop tiles look MUCH better in the RTM build (though customization is still left to Modern apps). Can’t seem to find a screenshot though.

But on the other hand, of course we want people to develop Modern apps. That’s why we built the platform. But the desktop tiles aren’t a part of that at all.

If I were the author, I’d bring up Contracts as a much better example. Desktop apps can’t support the Share Contract, or Search, or whatever; only Modern apps can. Of course, there’s no telling if this is simply a v1 limitation or a longer strategy; even I have no idea (I’ve only been at the company a little over a year). If we waited to release Windows until we had implemented everything we wanted to do, it wouldn’t come out for years. We have to draw the line somewhere.

Disclaimer: these are my thoughts, not the company’s.

In defence, I presented this only as a “small piece of evidence”.

Note the use of the term “Modern apps”.