Microsoft’s CoreCLR is now available on GitHub. We knew this was coming, but it is still a significant step, since this piece is the very heart of .NET: the execution engine that consumes a .NET IL (Intermediate Language) executable and compiles it to machine code for execution. The IL can easily be decompiled back to C#; it is in a sense fairly close to what you wrote in the editor. The CLR piece compiles it to a native executable, and also handles garbage collection (automatic memory management) and interop with other  native code libraries. The just-in-time compiler in CoreCLR is called RyuJIT.

CoreCLR is not same as the .NET Framework CLR (as found in the Windows desktop today), though one thing we now learn is that it is a true subset:

We setup a live 2-way mirror between the coreclr repo on GitHub and the .NET Framework TFS server within Microsoft. The latency of the mirror is low, measurable in minutes.

Contributions made to the coreclr repo are integrated to the Microsoft TFS server automatically and will become part of both the .NET Framework and .NET Core products. The same is true in reverse, that .NET Framework CLR changes (within the CoreCLR subset) are mirrored to the CoreCLR repo. These changes will sometimes result in large commits to unrelated components.

This is good news since it reduces the risk of fragmentation between the .NET Framework and the CoreCLR. Note that the same does not apply to the framework libraries, which are forked between .NET Framework and CoreFX. The reason for the fork is to enable cross-platform .NET and to benefit from greater modularity in the Framework without breaking the existing .NET Framework.

Some other points of interest:

There is a key architectural difference between CoreCLR and the .NET Framework, which is that in CoreCLR each application is deployed with the runtime and libraries it requires, whereas in the .NET Framework applications depend on a system-managed runtime and shared libraries. This has the advantage that applications are standalone, and you could run one from say a portable USB drive on a system which did not have .NET or Mono installed.

The disadvantage, aside from greater use of disk space, is that patching the same libraries across multiple applications is hard. In the interview here Microsoft offers a clue about how it might come up with a solution for this. Jan Kotas on the CLR team talks about an ideal scenario where identical copies of the same DLL are in fact shared even though each application appears to have its own copy. This sounds similar to the mechanism used by de-duplication in Windows Server. The file system makes it look as if several copies of a file exist in different directories, but in fact there is only one. If you update a file though, the right thing happens and only the virtual copy that you overwrite is changed. It sounds as if Kotas has in mind a variant where you could say, “update this file and all its instances elsewhere.” This would of course somewhat undermine the concept of app-isolated dependencies; but you know what they say about cakes and eating them:

“The ideal we should get to is every application has a local copy of everything. People eventually get to a point where through some OS mechanisms or through some other means the DLLs that are the same between different applications would get shared. That way nobody needs to worry about is this shared, or is it not shared. The ideal place that we’d like to get to is that sharing happens under the hood. It can happen through different mechanisms for different applications. [That would be the] ideal place for the runtime and how to version it.”

said Kotas. Possibly I am misinterpreting this; but it does sound like some kind of sharing-but-not-sharing solution to the patching problem.

Another point to note: a managed code application cannot execute without help. In order to run, every managed application needs three things:

2. The CLR – either CoreCLR or the .NET Framework CLR

3. A CLR host which loads the CLR and instructs it to execute the application. The CLR host has to be native code, for obvious reasons.

In the .NET Framework this third piece is invisible, since it is handled by the operating system (though apparently SQL Server is a special case). In the CoreCLR world though, you need to think about the CLR host. ASP.NET 5.0 has the KRuntime (K probably stands for Katana) which I think is the same as Project K. If you want to test CoreCLR today, you can use a host called CoreConsole which (as its name implies) lets you run console apps. Apparently there are a few technical problems using CoreCLR with ASP.NET 5 as the moment. 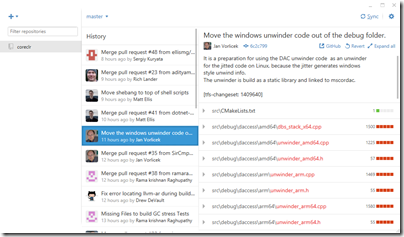