The tech world has been buzzing with news of bugs (or design flaws, take your pick) in mainly Intel CPUs, going way back, which enables malware to access memory in the computer that should be inaccessible.

How do you protect against this risk? The industry has done a poor job in communicating what users (or even system admins) should do.

A key reason why this problem is so serious is that it risks a nightmare scenario for public cloud vendors, or any hosting company. This is where software running in a virtual machine is able to access memory, and potentially introduce malware, in either the host server or other virtual machines running on the same server. The nature of public cloud is that anyone can run up a virtual machine and do what they will, so protecting against this issue is essential. The biggest providers, including AWS, Microsoft and Google, appear to have moved quickly to protect their public cloud platforms. For example:

The majority of Azure infrastructure has already been updated to address this vulnerability. Some aspects of Azure are still being updated and require a reboot of customer VMs for the security update to take effect. Many of you have received notification in recent weeks of a planned maintenance on Azure and have already rebooted your VMs to apply the fix, and no further action by you is required.

With the public disclosure of the security vulnerability today, we are accelerating the planned maintenance timing and will begin automatically rebooting the remaining impacted VMs starting at 3:30pm PST on January 3, 2018. The self-service maintenance window that was available for some customers has now ended, in order to begin this accelerated update.

1. The update will not be applied unless your antivirus vendor has set a special registry key. The reason is that the update may crash your computer if the antivirus software accesses memory is a certain way, which it may do. So you have to wait for your antivirus vendor to do this, or remove your third-party anti-virus and use the built-in Windows Defender.

2. The software patch is not complete protection. You also need to update your BIOS, if an update is available. Whether or not it is available may be uncertain. For example, I am pretty sure that I found the right update for my HP PC, based on the following clues:

– The description of the update is “Provides improved security” 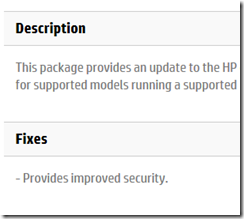 So now is the time, if you have not done so already, to go to the support sites for your servers and PCs, or motherboard vendor if you assembled your own, see if there is a BIOS update, try to figure out it it addresses Spectre and Meltdown, and apply it.

If you cannot find an update, you are not fully protected.

It is not an easy process and realistically many PCs will never be updated, especially older ones.

What is most disappointing is the lack of clarity or alerts from vendors about the problem. I visited the HPE support site yesterday in the hope of finding up to date information on HP’s server patches,  to find only a maze of twist little link passages, all alike, none of which led to the information I sought. The only thing you can do is to trace the driver downloads for your server in the hope of finding a BIOS update.

Common sense suggests that PCs and laptops will be a bigger risk than private servers, since unlike public cloud vendors you do not allow anyone out there to run up VMs.

At this point it is hard to tell how big a problem this will be. Best practice though suggests updating all your PCs and servers immediately, as well as checking that your hosting company has done the same. In this particular case, achieving this is challenging.

PS kudos to BleepingComputer for this nice article and links; the kind of practical help that hard-pressed users and admins need.

There is also a great list of fixes and mitigations for various platforms here:

There is a handy PowerShell script called speculationcontrol which you can install and run to check status. I was able to confirm that the HP bios update mentioned above is the right one. Just run PowerShell with admin rights and type: 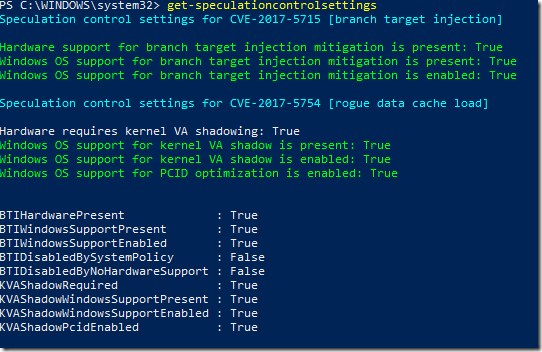