Music is something I care about; so when the industry came up with something better than CD for playing it back, some ten years ago, I took a keen interest. There was an ugly format war – SACD vs DVDA – but when universal players appeared, that could play either format, I purchased one, along with a few examples of each type of disc. 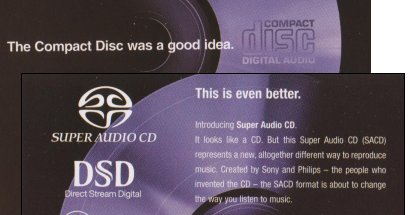 On the whole I think they sound good, and of course they also have multi-channel capability which is nice if you are properly set up for that. I haven’t purchased either type of disc in large numbers though, mainly because of the price premium, and also because they are awkward to rip to a music server, which is how I do most of my listening. Most SACDs are hybrid, which means they have a standard CD layer as well as a high resolution layer, and you can rip the CD layer easily enough; but then you do not get the benefit of high resolution sound.

But is there a benefit, other than more care in mastering that could equally have been applied to a CD? High resolution is certainly useful for audio professionals who are processing the sound, but some argue that even CD audio is sufficiently accurate for human hearing. Two people, Brad Meyer and David Moran, conducted a series of blind tests in 2007 to prove the point: Audibility of a CD-Standard A/D/A Loop Inserted into High-Resolution Audio Playback. In other words, they used a box that converted the output from a high-resolution player to CD-quality digital and back, and found that nobody could reliably tell the difference at normal listening levels.

Meyer and Moran’s research throws into question much of the rationale behind SACD and DVDA, which is marketed on the basis of its superior sound quality. It’s caused a debate in the audio industry, though perhaps not as much as you might expect. Some argue that the test was flawed, others that these “absurd” results prove that blind testing simply does not work. Others agree with the results and find them unsurprising. It is notable though that even critics and vendors with a stake in the audible superiority of high-resolution sound have not yet (as far as I know) come up with a repeat test, correcting the flaws they see in the original, and achieving different results, though it is still possible that someone may do so.

I wrote this up with more detail here.