I’m at Intel’s software conference in Barcelona, and I’ve not taken a laptop with me – well, not unless you count this little Toshiba NB300 Netbook. And you should. A netbook like this one is not different in kind from a laptop; it simply represents a different blend of the usual ingredients: processor speed, battery life, screen size, features.

With hindsight, it was inevitable. Until relatively recently, vendors assumed – partly because it was to their advantage to do so – that as technology improved, we would want more powerful laptops but with similar size and battery life and at a relatively high price. In reality that was misjudged; many of us would willingly trade some performance and features in favour of longer battery life, and a smaller size is more convenient for travelling. The performance issue is nebulous anyway; although we think of a netbook as low-end, in reality it performs as well as a high-end laptop a few years back, and which did not seem under powered at the time.

The cycle was broken by Asus with the original Eee PC running Linux, which proved immediately that there was a ready market for this kind of compromise. Next came Windows 7, which was the first Windows release to have lower real-world system requirements that its predecessor. Stick Windows 7 on a netbook, and you have a decent little portable. In honour of its launch yesterday, I installed Visual Studio 2010 on mine: 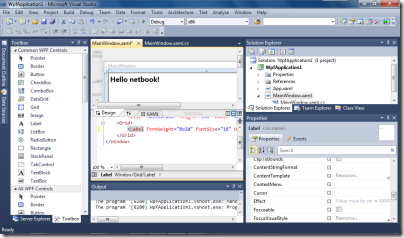 Granted it’s a little slow, and the 1024 x 600 screen not ideal, but it works. Give it a couple of years; the netbook of 2012 will probably run this stuff rather well, if you can think of a reason to do it.

Personally I think smaller, lighter and longer battery life are all big features and make a “netbook” a better choice than a laptop for many uses. Apple’s iPad is another twist on the same theme, making portable computing more convenient.

4 thoughts on “Rethinking netbook vs laptop”