I’ve been trying out Microsoft’s Office Web Apps, as provided for the release version of SharePoint 2010. The cross platform story is uneven, whether across Mac/Windows/Linux, or across different browsers, or even across different versions of Windows and Office. So far it does mostly work though, even if there are problems with certain tasks like printing or opening an online document in a desktop application.

The biggest problem I’ve had is on Linux. Supposedly Firefox 3.5 on Linux is supported. I ran up Ubuntu and Firefox 3.5, and went to look at a document in Word Web App. When I selected the document, Firefox quit. Every time.

After checking that Firefox was up-to-date it occurred to me that the problem might be related to Moonlight, the Linux implementation of Silverlight done by the Mono team. I disabled it. Suddenly, everything worked, even Edit in browser.

Moonlight is not just an open source project like the original Mono. It has a certain amount of official blessing from Microsoft. Here’s what VP Scott Guthrie said back in September 2007:

You would think therefore that Microsoft would test the Firefox/Linux/Moonlight combination with its shiny new Office Web Apps. Apparently not. Here’s what the user experience is like for Office Word App. I figured that the solution might be to upgrade Moonlight to the latest version, so I did, installing what is now called Novell Moonlight 2.2. I went back to Word Web App. Firefox no longer crashes, but I now get a blank area where the Word document should be shown, and an error if I resize the browser window: 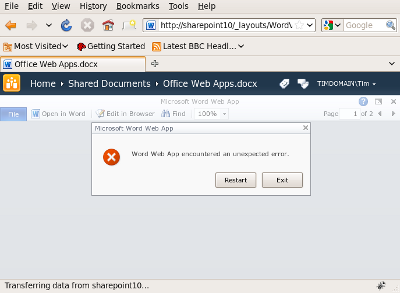 Now let’s see what happens if I disable Moonlight: 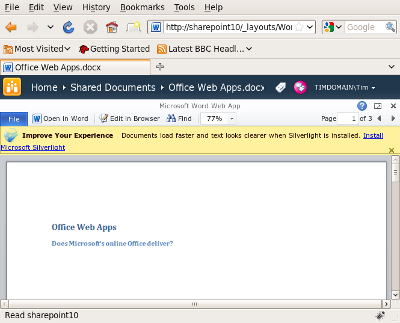 Everything is fine – except now there is a banner inviting me to “Improve my experience” by installing Silverlight. If I follow the link I eventually get back to the same Moonlight install that I have just enabled, which would actually break rather than improve Word Web App.

It is obvious that if users have to disable Moonlight to work with Office Web Apps, this will not help Moonlight adoption on Linux.

Office Web Apps are new and I’d hope this is something that Microsoft, Novell and the Mono team can soon fix between them. One reason for highlighting it now is the hope that something could be done before the full roll-out of Office and SharePoint 2010 on May 12th.

The real point though is what this says about the extent to which Microsoft cares about Moonlight and Linux users, and how much or little communication takes place between Microsoft and Novell. Silverlight isn’t required for Office Web Apps – as you can see from the above – but it is used to good effect where available, and this Office release is therefore an important release for Silverlight as well.

Microsoft should make up its mind. Is Novell really a trusted partner for Silverlight on Linux? Or a third-party product that has to take its chances?

5 thoughts on “Microsoft – make up your mind about Moonlight”