With Office 2010 about to launch, it’s fun to look back at earlier Office launches, especially some of the features which were hyped as breakthroughs at the time, only to be dropped or hidden a couple of versions later. Here are six which come to mind.

Smart Tags were the big new feature of Office XP. You would be typing a document, and as you typed it would pull in data or run wizards by recognising the content of your document. Smart Tags were originally envisaged for Internet Explorer as well, but controversial since they overlay third-party content with Microsoft’s interpretation of what it might be about; that feature was dropped. Smart Tags just about persisted into Office 2003, after which Microsoft stopped talking about them. 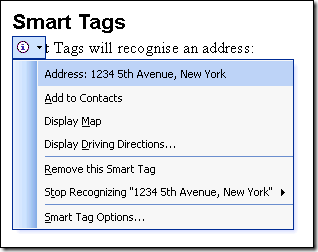 Curiously, if you hit Display Map in Word 2003, then after a few Internet Explorer convulsions a map of New York appears with the location marked (I have no idea if it exists, I just picked the numbers 12345). In Word 2010, the feature is hidden, but if I right-click the address I do get Display Map under Additional Actions: 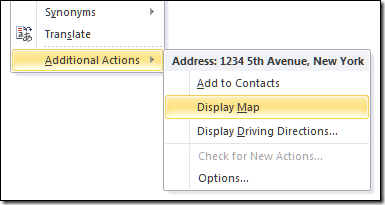 However, if I select Display Map I just get a map of the UK with a search box. It appears that this feature in Word 2010 did not receive the most rigorous attention or testing.

Introduced in Office 95 (along with the Answer Wizard), the Tip Wizard would observe your actions and come up with a tip if it thought you might need help. It was actually a better approach than the Office Assistant which was to follow, being less intrusive and occasionally even helpful. 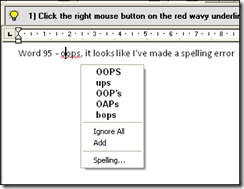 The Answer Wizard was less impressive – billed as some sort of intelligent question parser, but in practice little different than simply searching help for keywords.

The unforgettable Clippy, introduced in Office 97, whose opening remarks were usually “It looks like you’re writing a letter.” Clippy had a wonderful range of animations though; almost as if more effort went into the animations than the artificial intelligence. You did not have to have Clippy; there were a variety of other characters available. The Office Assistant also hijacked certain dialogs, such as the option to save when closing a document.

So what was actually wrong with Clippy? Part of it was the faulty AI, but more seriously the application overstepped the mark between what is helpful and what is annoying and intrusive. Someone even wrote a paper on the subject.

Although everyone loves to poke fun at Clippy, Office 97 (in which he first appeared) was a huge success for Microsoft – accordng to the company, it was the fastest selling application in PC history at the time. Clippy did not last though; by the time of Office XP the Assistant was off by default, and in Office 2007 it is not available at all.

Here is an idea which really seems to make sense. The problem: too many menu options that few people use, cluttering up the user interface. The solution: menus which only present the features you actually use. The other options are hidden by default, but can be revealed by clicking a double-arrow. If you use a hidden menu a few times, it starts to appear by default; if you do not use an option for a while, it hides itself. The feature arrived in Office 2000.

The problem with adaptive menus was the wrong things got hidden. I always found it annoying when Office hid the Print menu, even though I rarely print documents (which is why it got hidden).

They also fail the consistency test. Humans need landmarks in order to navigate, and making them shift and change over time is disorientating.

Once you have a network, then among the most obvious things to do is to start sharing basic things like contact lists. Microsoft has a feature in Exchange called Public Folders which does this nicely. But what about little workgroups that do not have Exchange? Outlook 98 introduced Net Folders, aimed at exactly this need. You could configure a Net Folder, in which case hidden emails were sent round the network to synchronize everyone’s changes.

Unfortunately nobody in Microsoft used Net Folders. Why would they, when they had Exchange? In consequence, the Net Folders feature never worked correctly; they would inevitably become corrupt or non-functional after a while. After Outlook 2000, the feature disappeared.

At the time Microsoft hinted that JET was nearing end of life, and that the local SQL Server engine might take over. It was a hard sell though. Users understood the MDB: a file that has all their data in it. You could copy it to a USB drive and take it home, or email it to someone, and it would happily open in another Access installation (version differences aside). SQL Server is just more fiddly. In any case, you can connect to SQL Server from an MDB or Accdb, so why bother? After Access XP, Microsoft moved away from the idea of Access Data Projects.

Actually, Access Data Projects are still there even in Access 2010, just hidden. Go to the backstage view, select New, and type a filename with an .adp extension. Then click Create. Access will ask if you want a new or existing SQL Server database. 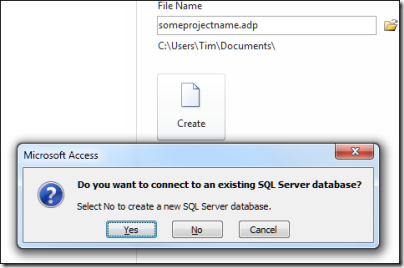 I could go on. The Office Binder – a great feature of Office 95-2000 that rolls documents of multiple types into one file. Data Access Pages – a somewhat misconceived feature of Access 2000 for binding HTML to database fields. What’s your favourite abandoned feature?