Nothing better demonstrates Adobe’s concern about being locked out of Apple’s mobile platform than a huge advertising campaign attempting, one assumes, to win public support and pressure Apple into yielding ground.

Still, if you are going to run a big PR campaign it helps to be right. But Adobe seems to be arguing that Flash support is essential to an open web, which is incorrect.

We believe that consumers should be able to freely access their favorite content and applications, regardless of what computer they have, what browser they like, or what device suits their needs. No company — no matter how big or how creative — should dictate what you can create, how you create it, or what you can experience on the web. … In the end, we believe the question is really this: Who controls the World Wide Web? And we believe the answer is: nobody — and everybody, but certainly not a single company.

Very good, but this is not an argument in favour of Flash. Flash is not part of HTML, Flash is not a standard, and Flash is not open – the specification for the player is published, but what goes into that specification is controlled solely by Adobe, and its player implementation is not open source. Flash is a proprietary plug-in. Are Geschke and Warnock arguing that all browsers on all devices should allow all plug-ins to be installed – including Silverlight, Java, ActiveX, and anything else you can think of? Or are they arguing that Adobe Flash is a special case? It is certainly a special case for Adobe, but any company will argue in favour of its own stuff.

The full-page advertisement that I’ve seen in various newspapers is not much better. Adobe’s pitch is that Apple is:

taking away your freedom to choose what you create, how you create it, and what you experience on the web

This again is incorrect. Apple has an excellent mobile browser based on WebKit, as also used by Google, Adobe and others. You can do what you want on the Web, but if you use Flash it won’t render on Apple’s mobile devices. All that means is that Apple has chosen not to support Adobe’s plug-in. It is not an issue of freedom.

Personally I don’t like Apple’s approach. I’d prefer it to support the leading plug-ins (not only Flash); I don’t like the appification of the web -  dubbed the splinternet, or splintered web, by some. And I particularly object to Apple’s clause 3.3.1 in its new developer agreement, which blocks apps that are created with cross-platform tools, no matter how well they perform or how good they look. That, it seems to me, is anti-competitive in spirit.

I think Adobe should make more of clause 3.3.1, rather than indulging in special pleading for its plug-in. And if I were Adobe, I wouldn’t be whinging about Flash being blocked. Rather, I’d be highlighting all the great things Flash can do, and all the content you will miss without it. My full-page ad would say, “Mr Jobs, your iPhone is broken”, and extol the merits of Android and other devices that will run Flash.

I’d also be working on the technical arguments, that Flash is unstable, insecure and resource-hungry. Is it Apple’s fault? Is it because of poorly coded SWFs, and if so what is Adobe doing about that? And how will Adobe improve Flash so that it behaves better in future, and not be perceived as the new Vista?

Maybe next time round? 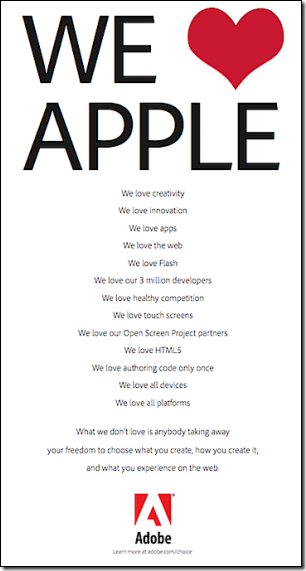 8 thoughts on “Adobe’s campaign against Apple misses the target”