It’s Mac anniversary time: 30 years since the first Macintosh (with 128K RAM) in 1984 – January 24th according to Wikipedia; Apple’s beautiful timeline is rather sketchy when it comes to details like actual dates or specs.

My first personal computer though was a hand-me-down Commodore PET 4032 with only 32K of RAM, which pre-dated the Mac by about 4 years (though not by the time I got hold of it). 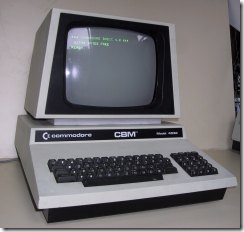 The PET was fun because it was small enough that you could learn almost everything there was to know about it though a book called The PET Revealed that listed every address and what it did. I had a word processor called Wordcraft that was excellent, provided you could live with only having one page in memory at a time; a spreadsheet called VisiCalc that was even better; and a database that was so bad that I forget its name. You could also play Space Invaders using a character-based screen; the missiles were double-dagger (ǂ)characters.

The small company that I was a little involved with at the time migrated to Macs almost as soon as they were available so I had some contact with them early on. The defining moment in my personal computer history though was when I needed to buy a new machine for a college course. What would it be?

If all the choices had cost the same, I would have purchased a Mac. My second choice, since this was a machine for work, would have been a PC clone. Both were expensive enough that I did not seriously consider them.

Instead, I bought a Jackintosh, sorry an Atari ST, with a mono 640 x 200 monitor and a second disk drive. It had the GEM graphical user interface, 512K RAM, a Motorola 68000 CPU, and built-in MIDI ports making it popular with musicians.

The ST exceeded expectations. Despite being mainly perceived as a games machine, there were some excellent applications. I settled on Protext and later That’s Write for word processing, Signum for desktop publishing, Logistix for spreadsheets, Superbase for database, the wonderful Notator for messing around with MIDI and music notation, and did some programming with GFA Basic and HiSoft C.

If I had had a Mac or PC, I would have benefited from a wider choice of business applications, but lost out on the gaming side (which I could not entirely resist). The ST had some quirks but most things could be achieved, and the effort was illuminating in the sense of learning how computers and software tick.

Despite the Mac-like UI of the Atari ST, my sense was that most Atari owners migrated to the PC, partly perhaps for cost reasons, and partly because of the PC’s culture of “do anything you want” which was more like that of the ST. The PC’s strength in business also made it a better choice in some areas, like database work.

I was also doing increasing amounts of IT journalism, and moving from ST Format to PC Format to Personal Computer World kept me mainly in the PC camp.

For many years though I have found it important to keep up with the Mac, as well as using it for testing, and have had a series of machines. I now have my desktop set up so I can switch easily between PC and Mac. I enjoy visiting it from time to time but I am not tempted to live there. It is no more productive for me than a PC, and Microsoft Office works better on a PC in my experience (no surprise) which is a factor. I miss some favourite utilities like Live Writer, dBpoweramp, and Foobar 2000.

That said, I recognise the advantages of the Mac for many users, in terms of usability, design, and fewer annoyances than Windows. Developers benefit from a UNIX-like operating system that works better with open source tools. There is still a price premium, but not to the extent there was when I picked an Atari ST instead.

One thought on “Thirty years of mainly not the Mac”