Every year in an English country hotel near Melton Mowbray a strange but endearing event takes place.

Called variously the HiFi Wigwam Show (after the forum that runs it) or the Scalford HiFi Show (after the hotel where it takes place), this is a show where most of the exhibitors are enthusiasts rather than dealers, and the kit on show includes much that is old, unavailable or home-made – like these stacked Quad 57s from the Sixties. 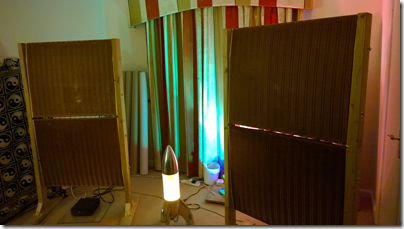 I turned up at Scalford with a simple experiment in mind. Take a classic pre-power amplifier from thirty years ago and compare it to a modern, budget, integrated amplifier. What kind of differences will be heard?

The classic amplifier is a Naim 32.5 preamp powered by a Hi-Cap power supply, and a 250 power amplifier. Price back in 1984 in the region of £3500. The Naim was serviced around five years ago to replace old or failing electrolytic and tantalum capacitors.

The source is a Logitech Media Server (Squeezebox Server) with a Squeezebox Touch modified to work with high resolution audio up to 24/192, and a Teac UD-H01 DAC. Speakers were Quad 11L, occasionally substituted with Linn Kans for a traditional Linn/Naim combination. A BK Electronics sub-woofer was on at a low level to supplement the bass. 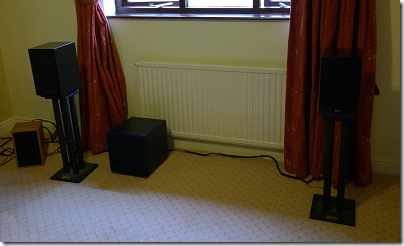 A QED MA19 switchbox was used to switch instantly between the two amplifiers. Naim NAC A4 cable was used throughout.

Disclaimer: this was not intended as a scientific investigation. Level matching was done by ear, and there were several aspects of the setup that were sub-optimal. The system was in a small hotel bedroom (as you can see by the headrest which forms the backdrop to the system) and thrown together quickly.

Still, the Naim amplifier is both highly regarded by many audiophiles, and also considered somewhat coloured, this failing more than mitigated by its pace and drive. The Yamaha won awards as a good budget amplifier but is not really anything special; however it has the benefit of modern electronics. These two amplifiers are very different both in age and (you would think) character.

A benefit of the setup was that both amplifiers were always on. Unless you knew the position of the switches and how they were wired, you could not tell which was playing. It was irresistible; when visitors asked which was playing I switched between them and said, you tell me.

Again, this was not science, and I have no tally of the results. Some visitors confidently identified the Naim and were correct, and an approximately equal number were incorrect. Some said they simply could not hear a difference, and two or three times I had to prove that the switchbox was working by twiddling the controls. A small boy who probably had the best hearing of all the visitors declared that there was no difference.

Note that I did reveal the identity of the amplifiers at regular intervals, so listeners typically listened sighted after listening blind.

Of those who expressed a preference, the Yamaha and Naim were each preferred equally often. Some said the Yamaha was slightly brighter (I agree with this).

There were two or three who expressed a strong preference for the Naim, but the consensus view was that the amplifiers sounded more alike than had been expected.

The sound was also pretty good. “I would be happy with either” was a common remark. I would have preferred to use high-end speakers, but the Quads proved delightfully transparent. Most visitors who heard both preferred the Quads to the Kans, which sounded thin and boxy in comparison, though I do wonder if after thirty years the crossover electronics in the Kans may need attention. It was easy to hear the difference between high quality and low quality sources. I used some of the high-resolution files which Linn kindly gave away as samples for Christmas 2013, along with other material.

YNWOAN: I heard the Yamaha/Naim demo and had no difficulty hearing a difference between the two with the Yamaha sounding rather ‘thin’ – even at the low levels used.

Pete the Feet: How cruel can a man be? Pitching a recently serviced Naim 32.5, Hicap and NAP250 against a paltry Yamaha £250 integrated. Not much difference but the Yamaha had the edge.

Some felt that the Naim was compromised by the stacking of the power supply and pre-amp on the power amp. There was no hum and I am sceptical of the difference moving them apart, or using acoustic tables, might have made; but of course it is possible. Another interesting thing to test would be the impact of the switchbox itself, though again I would be surprised if this is significant.

How much should you spend on an amplifier? Should all competent amplifiers sound the same? These are questions that interest me. I set up this experiment with no particular expectations, but the experience does make me wonder whether we worry too much about amplification, given that other parts of the audio chain introduce far more distortion (particularly transducers: microphones and loudspeakers).

A more rigorous experiment than mine came to similar conclusions:

How can it be possible that a basic system with such a price difference against the  reference” one, poorly placed, using the cheapest signal cables found, couldn’t be distinguished from the more expensive one?

And, most of it all, how come the cheap system was chosen by so many people as the best sounding of the two?

Shouldn’t the differences be so evident that it’d be a child’s game to pick the best?

Well, we think that each can reach to its own conclusion…

One further comment though. I love that Naim amplifier, and do not personally find something like the AS500 a satisfactory replacement, despite the convenience of a remote control. Is it just that the classic retro looks, high quality workmanship and solid construction convince my brain into hearing more convincing music reproduction, provided I know that it is playing? Or are there audio subtleties that cannot easily be recognised by quick switching?

Unfortunately the audio industry has such fear of blind testing that these questions are not investigated as often or as thoroughly as some of us would like.

One thought on “Fun with amplifiers: classic Naim versus modern Yamaha integrated”