I am investigating hosting this site on Windows Azure, partly as a learning exercise, and possibly to enable easier scaling.

I discovered that any web site short of Standard is worthless other than for experimentation and prototyping. I set up a Small Standard Web Site (£48 per month). But what database? I recalled that you can run WordPress with SQL Server and tried using a 1GB SQL Server Web Edition hosted on Azure (£6.35 per month).

In order to use this, I used the Brandoo WordPress configuration which is set up for SQL Server. I later discovered that it uses the WP Db Abstraction plug-in which according to its home page has not been updated for two years. The installation worked, but some plug-ins reported database errors. I imported some posts and found that search was not working; all searches failed with nothing found.

My conclusion is that running WordPress with SQL Server is unwise unless you have no choice. I looked for another solution.

Azure has a Web Site template which uses WordPress and a MySQL database hosted by ClearDB. I would rather not involve another hosting company, so considered other options. One is to run a VM on Azure and to install MySQL on it. If you are doing that, you might as well put WordPress on the same VM at least until the traffic justifies scaling out. So I have created a new Medium Linux VM – two virtual cores, 3.5GB RAM – at £57 per month, with Ubuntu, and installed the LAMP stack and WordPress on that. The cost is similar to the Windows/SQL Server setup, but the VM is a higher specification, since a Small Web Site is 1 virtual core and 1.75GB RAM. You also get full access to the VM, as opposed to the limited access that a Web Site offers. The installation is a bit more effort but performance is better and it looks like this might work. 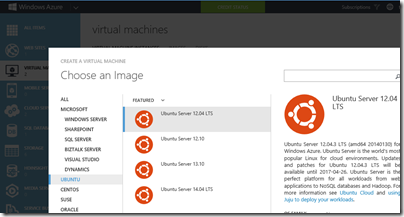