Google has made a change to its search algorithm that means most of the results shown for a search may now come from a single domain. Previously, it would only show a couple of results from one domain, on the assumption that users would prefer to select from a diversity of results.

The example chosen by searchengineland is a good one. Search for Apple iPod and you get a page that is mostly links to Apple’s site. 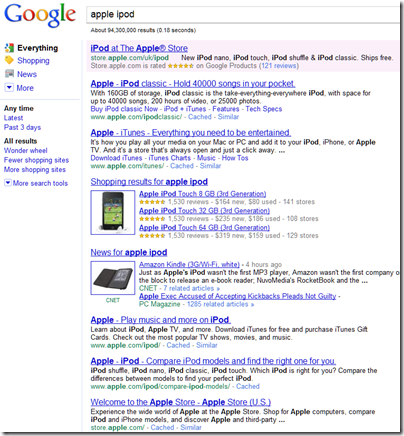 If you search for the single word ipod you get more diversity – odd, since only Apple manufacture the ipod so you could argue that the searches are the same. Some people use ipod as a generic name for MP3 player, but that doesn’t seem to be reflected; all the results still relate to Apple’s device. 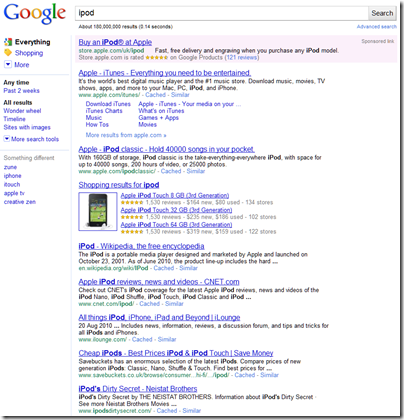 Personally I’d rather see diversity. I don’t see the need for this change, since the site summary with deep links works well when a particular domain closely matches the search term. You can see an example of this in the top result for the ipod search above. Note that it even has a link for “More results from apple.com”. What is the value of suppressing the results from other domains?

The overall impact is that big brands benefit, while smaller businesses and new entrants to markets suffer. It also makes independent comment that bit harder to find.

While to most of us changes like these are only of passing interest, to some they make the difference between a flourishing business and a dead one. Google has too much power.

Incidentally, I generally find Google significantly better than Bing, now its major competitor. However in this case Bing impresses, with categories such as reviews, prices, accessories, manuals and so on; and in the case of the Apple ipod search, a better balance between the official site and independents.

One thought on “Google favours big brands over diversity”