The big news in the audio world currently, announced at CES in Las Vegas, is that music streaming service Tidal has signed up to use MQA (Master Quality Authenticated), under the brand name Tidal Masters. MQA is a technology developed by Bob Stuart of Meridian Audio, based in Cambridge in the UK, though MQA seems to have its own identity despite sharing the same address as Meridian. 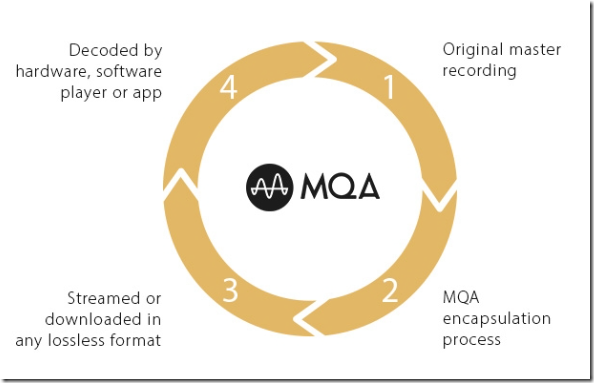 What is MQA? The question is easy but the answer is not. Here is the official short description:

Conventional audio formats discard parts of the sound to keep file size down, but part of this lost detail is the subtle timing information that allows us to build a realistic 3D soundscape in our minds. … With MQA, we go all the way back to the original master recording and capture the missing timing detail. We then use advanced digital processing to deliver it in a form that’s small enough to download or stream.

At first sight it looks like another format for lossless audio, and the description on MQA’s site confuses matters by making a comparison with MP3:

MP3 brings you just 10% of what was recorded in the studio. Everything else is lost to fit the music into a conveniently small file. MQA brings you the missing 90%.

There are two problems with this statement. One is that MP3 (or its successor AAC) actually sounds very close to the original, such that in tests most cannot tell the difference; and the other is that audiophiles tend not to use MP3 anyway, preferring formats like FLAC or ALAC (Apple’s version) which are lossless.

There is more to it than that though. There are three core aspects to MQA:

1. “Audio origami”: MQA achieves higher resolution than CD (16-bit/44.1MHz) by storing extra information in audio files that is otherwise wasted, as it stores audio that is below the noise floor (ie normally inaudible). There is a bit of double-think here as removing unnecessary parts of audio files is the sort of thing that MP3 and AAC do, which the MQA folk have told us is bad because we are not getting 100%.

This is also similar in concept to HDCD (High Definition Compatible Digital), a technology developed by Pacific Microsonics in the Eighties and acquired by Microsoft. Of course MQA says its technology is quite different!

Note that you need an MQA decoder to benefit from this extra resolution, and there is a nagging worry that without it the music will actually sound worse (HDCD has the same issue).

2. Authentication. MQA verifies that the digital stream is not tampered with, for example by audio features that convert or enhance the sound with digital processing. This can be an issue particularly with PCs or Macs where the built-in audio processing will do this by default, unless configured otherwise.

3. Audio “de-blurring”. According to MQA’s team:

There’s a problem with digital – it’s called blurring. Unlike analogue transmission, digital is non-degrading. So we don’t have pops and crackles, but we do have another problem – pre- and post-ringing. When a sound is processed back and forth through a digital converter the time resolution is impaired – causing ‘ringing’ before and after the event. This blurs the sound so we can’t tell exactly where it is in 3D space. MQA reduces this ringing by over 10 times compared to a 24/192 recording.

If this is an issue, it is not a well-known one, at least, not outside the niche of audiophiles and hi-fi vendors who historically have come up with all sorts of theories about improving audio which do not always stand up to scientific scrutiny.

So is MQA solving a non-problem? That’s certainly possible; but I do find it interesting that MQA has received a generally warm reception from listeners.

Have never really “done” digital before. 16/44 has always sounded ghastly to my ears right from the start and still now. MQA did indeed “fix” the various forms of distortion that I could hear present in everything where the sampling rate was taken down to just 44. … My findings – those of an improved sense of solidity in the stereo image and the lack of that horrendous crystalline glassy edge to things, especially on the fade, seem to be being mirrored in what people are hearing. It doesn’t have that thing I describe as a “choppy sense of truncation” which I suspect others mean by “transients”.
Basically, per the post above, it’s a bit like “good analogue”. Digital can finally hold its head up high against an analog from master-to vinyl performance. And not only that, hopefully, walk all over it and give us something genuinely new.

If this history of audio has shown us anything, it is that subjective judgements about what makes something sound better (and whether it is better) are desperately unreliable. Further, it is often hard to make true comparisons because to do requires so much careful preparation: identical source material, exactly matched volume, and the ability to switch between sources without knowing which is which, to avoid our clever brains from intervening and telling us we are hearing differences which our ears alone cannot detect.

We should be sceptical then; and even possibly depressed at the prospect of a proprietary format spoiling the freedom we have enjoyed since the removal of DRM from most downloadable audio files.

Still … is it possible that MQA has come up with a technology that really does make digital audio better? Of course we should allow for that possibility too.

I have signed up for Tidal’s trial and will report back shortly.