I run Logitech Media Server (LMS) on a Synology NAS. It works very well, better than when I used a Windows VM.

There is an annoyance though. Synology has been slow to keep its LMS package up to date and the official release is still 7.7.6. There are a few issues with this release, but I lived with it, until I discovered that LMS 9.x can play DSD files, using a DSDPlayer plugin that adds DoP (DSD over PCM) support. This means you can output native DSD provided you have a DSD DAC (and some DSD files to play). DSD is the format used by SACD and some audiophiles swear it sounds better than PCM.

I then discovered that Synology is showing signs of updating LMS and has a beta release of LMS 9.0. You enable beta versions in the Package Center and it will offer to update. 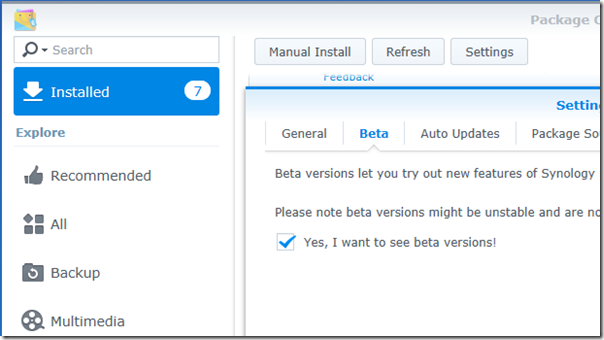 I installed, then added DSDPlayer and, hmm, I could see the DSD files but they did not play.

I found a fix for the DSD issue. A user has updated the plugin, and if you add the following plugin repository:

you can update DSDPlayer and it works.

Now I can play native DSF files through Squeezebox Touch (you also need the EDO modification) and a Teac DSD DAC. Great.

However, I then discovered that the LMS 9.0 UI does not work in Microsoft Edge, if you have the Creators Update. The links are not clickable.

There is a fix described here. I found the commit on GitHub here. However this does not update the Synology package. I logged into the Synology over SSH and made the change manually in @appstore/SqueezeCenter/HTML/Default/slimserver.css.

It works. I’m glad because I have LMS on the Edge favourites bar, and the alternative (opening LMS in IE or another browser) is less convenient.

And yes, I use Edge, in part to keep in touch with what it is like, in part because I’m resistant to a Google Chrome monoculture, and in part because it’s pretty good now (the initial Edge release was hardly usable).

There is still a problem though. The LMS Settings page does not work in Edge. I can live with that (open in Internet Explorer) but would like to find a fix.

Update: I fixed the settings issue by installing the latest LMS 9.0 with this patch. Many thanks to LMS user pinkdot on the LMS forums. However I still needed the manual fix for slimserver.css.