Here is an intriguing feature. You can now create a new kind of table called a FileTable. A FileTable is mapped to a folder on the filesystem, though you are not meant to access it directly once it is managed by SQL Server. However, you can access the folder in Windows Explorer, or over the network, as a network share. When you do this, a SQL Server component intercepts the Windows API calls and updates the FileTable. FileTables build on the existing FILESTREAM feature in SQL Server 2008, and the documents in the folder are stored as FILESTREAM data.

The illustration shows a folder in Windows Explorer that is also a SQL Server FileTable. 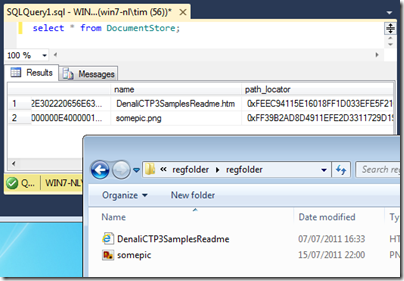 Is this the return of WinFS, the fabled relational file system which was originally planned for Windows Longhorn, but abandoned? Not really. According to the docs:

FileTables remove a significant barrier to the use of SQL Server for the storage and management of unstructured data that is currently residing as files on file servers. Enterprises can move this data from file servers into FileTables to take advantage of integrated administration and services provided by SQL Server. At the same time, they can maintain Windows application compatibility for their existing Windows applications that see this data as files in the file system.