Adobe is giving up its efforts to support developers deploying to multiple app stores. The idea of InMarket,  announced at the Adobe MAX Conference in October 2010, was to be a one-stop distribution point for developers seeking to target multiple platforms. Adobe handled distribution and billing. The reason given:

After reviewing our efforts and based on feedback from developers, we have decided that we will deliver the most value by helping developers author and publish their apps on multiple platforms. Given this focus, we have decided to discontinue development and support of Adobe InMarket. We are going to continue to provide support for publishing to different app stores through our tooling. The recent Flash Builder 4.5 and Flash Professional CS5.5 provide support for publishing to multiple mobile platforms including Android and Apple iOS devices.

Adobe is not giving developers much time to adjust. The InMarket URL will terminate on August 31. This is causing some consternation:

I don’t understand how you expect publishers will be able to push an update to all the markets they publish to with enough time to get their user base to update before they’re totally screwed. One month? You do realize that even updates pushed to AppUp can take up to 2-weeks for vetting? This is crazy

That said, the low traffic on the InMarket forum is a clue to what Adobe is closing it down.

InMarket only supported Intel AppUp and AIR Marketplace, which rather misses the point of targeting multiple platforms. Had Adobe been able to offer instant deployment to all the key app stores, including Android Market and Apple’s iOS App Store, it would have been more attractive. Given the complexities of the approval process, it is not surprising that this was hard to achieve. A further complication is that Adobe’s AIR runtime is not allowed on iOS. Apps for iOS have to be packaged as native iOS apps.

What about AIR Marketplace?

When we established Adobe AIR Marketplace three years ago, there were few distribution opportunities for AIR developers. There are now several app stores on desktops, mobile devices and tablets that service AIR developers including Apple App Store, Android Market, BlackBerry App World, Intel AppUp center, Samsung Apps, and Toshiba App Place. We encourage you to use these newer popular app stores to distribute your applications.

This of course describes describes exactly the problem that InMarket was meant to address: the challenge of maintaining support for multiple app stores.

AIR Marketplace is still up and running at the time of writing, and seems to have more life than InMarket: 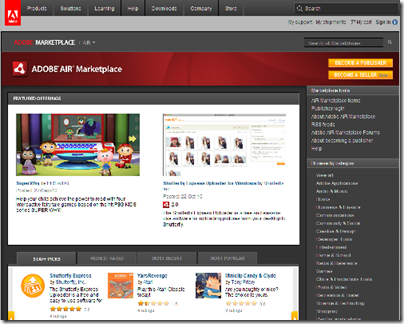 That said, why would any potential customer look specifically for AIR applications? It is a runtime and ideally should be invisible to the user. I was interested to see reference to AIR packagers for Windows, Mac and Android in a recent announcement, suggesting to me that Adobe is de-emphasising AIR as a runtime and making it into something more like a cross-platform development tool.