I have been drilling into Visual Studio 11 beta recently. This includes a simulator for debugging Windows 8 Metro style apps and I was surprised by the way it works. Unlike the Windows Phone emulators, which are isolated environments for testing apps, the simulator is actually a window into your own machine. 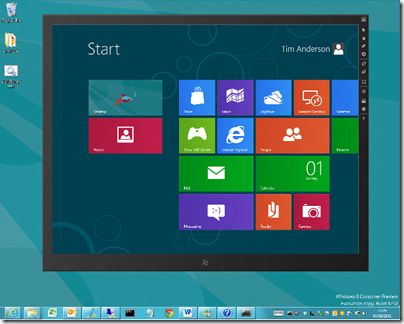 It occurred to me that the metro simulator accomplishes one of the things some users of the consumer preview have asked for. It lets you run Metro apps in a window, so that you can resize them, minimize them, and avoid the jarring context switch between full-screen Metro and the normal desktop with the taskbar. 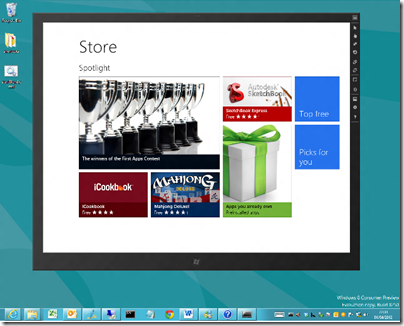 What is the simulator? It is actually a remote desktop session into your own machine. Normally you cannot do this, as Windows client only allows one session at a time and you already have one running, but Microsoft has given itself special permission.

Running Metro apps in a windows is not its intended purpose but it is interesting to try as it shows how this might have worked if Microsoft had taken a more desktop-centric approach to the dual personality in Windows 8.

A further thought is to consider why the Visual Studio team decided to do things this way. Microsoft’s developers saw the necessity of working in the Visual Studio IDE while also exercising the Metro-style app.

Well, what if you are not a developer, but you still want to have Excel open while you check out, for example, the Bing Finance app? It is not only developers that may have good reasons to have a desktop and a Metro app running side by side.

Dual monitors accomplish this of course, and to some extent so does the “Snap” split view if you have the right screen resolution, but running Metro in its own window is a rather convenient solution.