NVIDIA has ported its Nsight development tools, previously a plug-in for Visual Studio, to run within the open source Eclipse IDE for use on Mac and Linux. 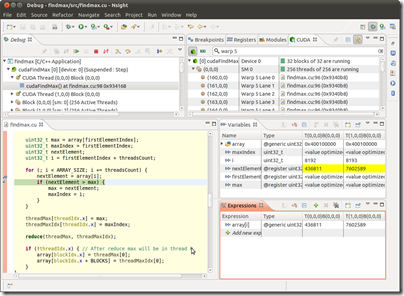 The Nsight tools include profiling, refactoring, syntax highlighting and auto-completion, as well as a bunch of code samples.

The Windows version for Visual Studio has also been updated, and now supports local GPU debugging as well as new support for DirectX frame debugging and analysis.

Although Eclipse of course runs on Windows, Nsight users should continue to use the Visual Studio version. NVIDIA is not supporting use of the Eclipse Nsight on Windows.

The tools are in preview and you can sign up to try them here.

Another significant development is the availability of the CUDA LLVM Compiler. NVIDIA has contributed CUDA compiler code to the open source LLVM project. This means that other languages which compile to LLVM intermediate assembly language can be adapted to support parallel processing on NVIDIA GPUs. The CUDA Compiler SDK will be made available this week at the NVIDIA GPU Technology Conference in San Jose.