Microsoft’s Tami Reller has announced the launch dates for Windows 8, the company’s controversial new operating system which combines the familiar desktop with a new touch-based user interface and associated runtime. She was speaking at the Worldwide Partner Conference under way in Toronto. 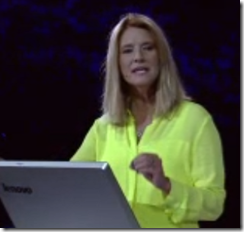 The team is on track to complete the software in early August, a milestone known as RTM (Release to Manufacturing).

This means that the final version of Windows 8 will be available for download by developers and enterprises from August – just a couple of months from now.

PCs and tablets preloaded with Windows 8 will be in the shops from late October.

The appearance of Windows 8 hardware is more significant this time round than is usually the case. One reason is that most PCs currently on sale do not have touch screens; and even those that do will lack the range of sensors expected in Windows 8 tablets.

Even more significant is that the ARM build of Windows 8, called Windows RT, is only available with new hardware. This means it will not be generally available at all until the hardware appears in October.