Remember how everyone hated Windows Vista but admins loved Server 2008? The awkward truth: they were built on the same core code. History may be about to repeat with Windows 8 and Server 2012, which also share code.

That said, I actually like Windows 8; but it is controversial because of its dual personality and the demands it places on existing Windows users to learn new ways to navigate the user interface. Server 8 has the Start screen too, but it boots to the desktop and most tools are available through the new Server Manager in any case, so I doubt it will cause much concern. 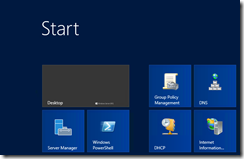 That is, if you install the GUI at all. Microsoft is a convert to the “No GUI on a server” idea and you are meant to install Server Core, which has no GUI, where possible, and run Server Manager on a Windows 8 client. There is also an intriguing intermediate option called the Minimal Server Interface, which has the GUI infrastructure but no Explorer shell or Internet Explorer. It sounds odd, but I quite like it; it is a bit like one of those stripped down Linux desktops where nothing gets in the way of the apps.

The Windows Server Evaluation Guide [pdf] does a good job of covering what’s new but runs to 177 pages, posing a challenge for those of us asked to review the new operating system in the usual 1500 words or fewer. I have had a go at this elsewhere. I will say though that from my first encounter with Server 2012, then called Server 8, at a press workshop in September 2011, I was impressed with the extent and significance of the new features. It does seem to me a breakthrough on several levels.

Virtualisation is one of course, with features like Hyper-V Replica doing what Microsoft should be doing: bringing features you would expect in large-scale enterprise setups within reach of small organisations. If you are not ready for public cloud, a couple of substantial servers running Hyper-V VMs with failover via Hyper-V Replica is an excellent setup.

Another is the effort Microsoft has put into modularisation and automation.

For modularity, Server 2012 is not quite at the level of the Debian server which hosts this web site, where I can add and remove packages with a simple apt-get command, but it is getting closer. You can now move between Server Core and full GUI simply by adding and removing features; it sounds easy, but represents an enormous untangling effort from the Windows team.

On the automation side, PowerShell has matured into a comprehensive scriptable, remoteable platform for managing Windows Server. I love the PowerShell History feature in the Active Directory Administration Center, which shows you the script generated by your actions in the GUI.

Storage is a big feature too. The new Storage Spaces are not aimed at Enterprises, but at the rest of us. We are beginning to see an end to the “help, we are running out of space on the C drive” problem which can cause considerable problems. You can even mount virtual disks as folders rather than drive letters, another sign that Windows is finally escaping its DOS (or CP/M?) heritage.

Annoyances? Lack of tool compatibility is one, specifically that you the new Hyper-V manager will not manage 2008 R2 VMs, and the new RSAT (Remote Server Administration Tools) require Windows 8.

More seriously, there are times when the beautiful new Server Manager UI gives mysterious errors, and as you drill down, you are back in the world of DCOM activation or some such nightmare from the past; which makes you realise that under the surface there is a ton of legacy still there and that Windows admins are not yet free from the burden of trawling the web for someone else with the same troubling error in Event Viewer. Maybe this is common to all operating systems; but Windows seems to have more than its share.

Never mind; this is a great upgrade and shows that Microsoft, for all its frustrations, is still capable of turning out strong products.

One thought on “Windows Server 2012: a great upgrade”