A user over on the technet forums says that the free standalone Hyper-V is too painful to use:

I was excited about the free stand-alone version and decided to try it out.  I downloaded the Hyper-V 2012 RC standalone version and installed it.  This thing is a trainwreck!  There is not a chance in hell that anyone will ever use this thing in scenarios like mine.  It obviously intended to be used by IT Geniuses in a domain only.  I would really like a version that I can up and running in less than half an hour like esxi.  How the heck is anyone going to evaluate it this in a reasonable manner?

To be clear, this is about the free Hyper-V Server, which is essentially Server Core with only the Hyper-V role available. It is not about Hyper-V in general as a feature of Windows Server and Windows 8.

Personally I think the standalone Hyper-V Server is a fantastic offering; but at the same time I see this user’s point. If you join the Hyper-V server to a Windows domain and use the administration tools in Windows 8 everything is fine; but if you are, say, a Mac user and download Hyper-V Server to have a look, it is not obvious what to do next. As it turns out you can get started just by typing powershell at a command prompt and then New-VM, but how would you know that? Further, if Hyper-V is not joined to a domain you will have permission issues trying to manage it remotely.

Install Hyper-V Server, and the screen you see after logging on does not even mention virtualization. 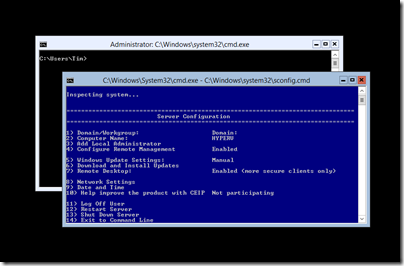 By contrast, with VMWare’s free ESXi has a web UI that works from any machine on the network and lets you get started creating and managing VMs. It is less capable than Hyper-V Server; but for getting up and running quickly in a non-domain environment it wins easily.

I have been working with Hyper-V Server 2012 myself recently, upgrading two servers on my own network which run a bunch of servers for development and test. From my perspective the free Hyper-V Server, which is essentially Server Core with only the Hyper-V role available, is a great offer from Microsoft, though I am still scratching my head over how to interpret the information (or lack of it) on the new product page, which refers to the download as a trial. I am pretty sure it is still offered on similar terms to those outlined for Hyper-V Server 2008 R2 by Program Manager Jeff Woolsey, who is clear that it is a free offering:

These specifications may have been improved for Hyper-V Server 2012; or perhaps reduced; or perhaps Microsoft really is making it a trial. It is all rather unclear, though I would guess we will get more details soon.

It is worth noting that if you do have a Windows domain and a Windows 8 client, Hyper-V Server is delightfully easy to use, especially with the newly released Remote Server Administration Tools that now work fine with Windows 8 RTM, even though at the time of writing the download page still says Release Preview. You can use Server Manager as well as Hyper-V Manager, giving immediate access to events, services and performance data, plus a bunch of useful features on a right-click menu: 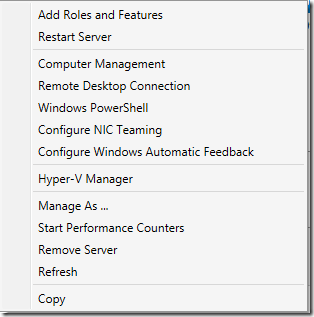 In addition, File and Storage services are installed by default, which I presume means you can use Storage Spaces with Hyper-V Server, which could be handy for hosting VMs with dynamically expanding virtual hard drives. Technically you could also use it as a file server, but I presume that would breach the license.

For working with VMs themselves of course you have the Hyper-V Manager which is a great tool and not difficult to use.

The question then: with all the work that has gone into these nice GUI tools, why does Microsoft throw out Hyper-V Server with so little help that a potential customer calls it “too painful to use”?

Normally the idea of free editions is to entice customers into upgrading to a paid-for version. That is certainly VMWare’s strategy, but Hyper-V seems to be different. It is actually good enough on its own that for many users it will be a long time before there is any need to upgrade. Microsoft’s hope, presumably, is that you will run Windows Server instances in those Hyper-V VMs, and these of course do need licenses. If you buy Windows 8 to run the GUI tools, that is another sale for Microsoft. In fact, the paid-for Windows Server 2012 can easily work out cheaper than the free editions, if you need a lot of server licenses, since they come with an allowance of licenses for virtual instances of Windows Server. Hyper-V Server is only really free if you run free software, such as Linux, in the VMs.

Personally I like Hyper-V Server for another reason. Its restricted features mean that there is no temptation to run other stuff on the host, and that in itself is an advantage.