Adobe’s Roy Fielding, who is also the original author of the W3C’s Tracking Preference Expression draft, has patched Apache, the open source web server, to ignore the Do Not Track header sent by Microsoft’s Internet Explorer 10, the browser in Windows 8: 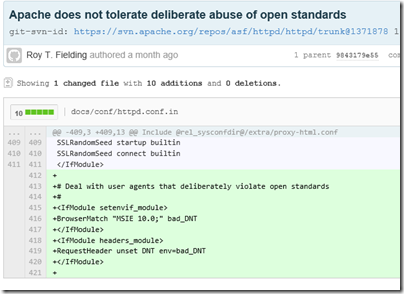 Under the heading “Apache does not tolerate deliberate abuse of open standards,” Fielding’s patch sets Apache to remove the Do Not Track request header if IE10 is the web browser.

Fielding’s argument, one presumes, is that IE10 breaches clause three in the Tracking Preference Expression draft:

However the document goes on to say (highlighting is mine):

Here is what happens in Windows 8 after startup. This is among the first screens you see when installing Windows 8, before you get full access to the operating system: 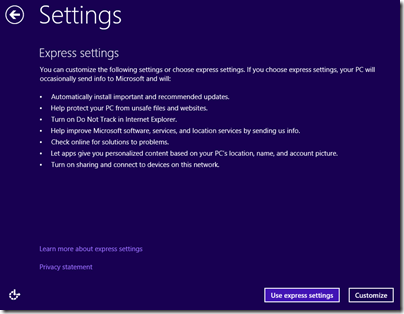 One of the settings specified is “Turn on Do Not Track in Internet Explorer. If you click Learn more about express settings you get this: 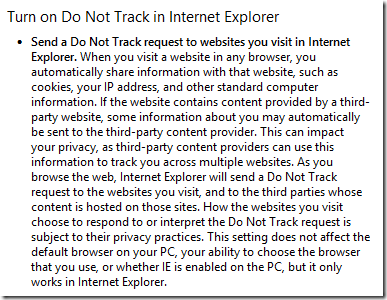 Does this respect the user’s preference? It seems to me a reasonable effort. The only objection I can see is if you consider that any user agent that defaults to setting Do Not Track on cannot be respecting the user’s preference. The draft specification does not state what the default should be.

It is also worth noting that clause 3 in the Tracking Preference Expression draft has changed; the wording about “not the choice of some vendor” was inserted in the 7th September draft, after Windows 8 was released to manufacturing. Here it is in the latest (March 2012) W3C Working draft:

Key to that notion of expression is that it must reflect the user’s preference, not the preference of some institutional or network-imposed mechanism…

Even if you agree with Fielding’s views on browser defaults, quietly patching the world’s most used web server to ignore the IE10 setting looks hard to defend, especially on a matter that is far from clear cut. Fielding is personally involved, not only as the author of the Tracking Preference Expression document, but also as an employee of Adobe, which specialises in digital marketing and may be more aligned with the vendors and their brands which may want to track user activity wherever their ads appear, rather than with end users.

Of course Apache is an open source project and Fielding’s patch has attracted the attention of the Apache community and may not survive.

It is also possible that a future draft of the Tracking Preference Expression document will state that Do Not Track must be off by default; but even if it does, patching the web server to ignore the browser’s header strikes me as a contentious solution.

Finally, it is worth noting that sending the Do Not Track header has little effect on whether or not your activity is tracked, since its meaning is unclear and respecting its value is a a choice made by third-parties, so this is a debate with little practical impact for the time being.