Cross-platform mobile tools vendor Appcelerator has released its latest mobile developer survey (in conjunction with IDC) representing the views of around 5,500 developers using its tools.

It is worth a read this time around. I was particularly interested to see what Appcelerator developers think of Windows 8, launching later this month. There is a chart showing the percentage of developers who are “very interested” in developing for various mobile platforms, and which shows Apple iOS leading at 85%/83% for iPhone and iPad, Android next, then HTML5, and then Windows 8 Tablets at 33% – already ahead of Windows Phone as well as Amazon and RIM devices (RIM has declined from 40% in January 2011). 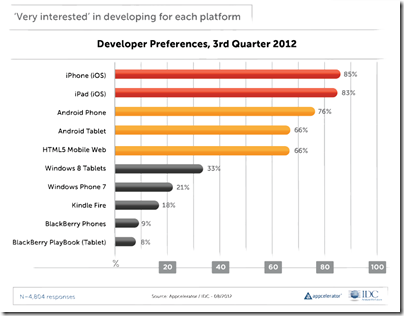 The report says that potential Windows 8 developers are most interested in the “shared development capabilities between desktop and tablet promised by Microsoft with the launch of Windows 8.” I am not sure exactly what this means, and of course surveys like this are broad-brush and different developers will have meant different things. It could be about code sharing between desktop applications and Windows Runtime (WinRT) apps. It could be about the ability to run WinRT apps on the desktop as well as the tablet. It could be about Visual Studio and its ability to target multiple Windows platforms. However, the the survey goes on to talk about a “single paradigm for both desktop and tablet/smartphone applications” which seems to look forward to a future Windows where desktop applications really are legacy.

There is also a note that there were as many developers convinced that they will not be building apps for Windows 8 or Windows phone, as those who were.

What really counts is in the next paragraph in the report:

This is the simple truth, which is why Microsoft has chosen a strategy which puts WinRT on every Windows 8 box whether or not it is really wanted.

The report also states that developers are dissatisfied with HTML5 for mobile applications, in terms of monetization, security, fragmentation, performance, and more. I suggest not taking too much account of this since Appcelerator’s Titanium tool is an alternative to HTML for mobile apps, so will have attracted those who do not want to use HTML5.

Finally, there is a fun section on what devices developers think they will be targeting in 2015. Televisions head the list, followed by connected cars. Most intriguing though are the final two: foldable screens and Google Glass. Apparently 67.1% believe Google Glass is in their future. Surveys, always entertaining but given the volatility of the results, not something you can rely on as a predictor.