Someone (and you wonder who) has taken it upon themselves to document rubbish apps in the new Windows Store. The stated reason:

Here we call out all the trash in the hopes that someone at Microsoft is listening and can remove them.

He or she has found plenty of examples – like the developer who submitted 20 trivial conversion apps and a tapping game that does not work; another who has got dozens of identical SDK samples listed as apps with different names; or the memory game listed 28 times complete with spelling errors and images suspected to be lifted from Disney.

Initially the puzzle was why apps which breach Windows Store guidelines are getting listed. But then there is more:

I feel like I’ve uncovered a conspiracy and I have no idea what to do with the information!

I emailed both Kusuma Sruthi and Pavan Kumar asking them why they had felt the need to submit their game multiple times to the Windows 8 store. I wasn’t really expecting a response. Yet both replied, pretty quickly, saying that they were told to do it but would remove the duplicates if I told them to. Was my email written with such authority?

Both claim to have been contacted by POOJA PATIL and told “to upload our apps with DIFFERENT NAMES and with SAME SOURCE CODE”. Whilst Pavan Kumar claimed not to have contact details he did say that she was from Microsoft. Kusuma Sruthi was more forthcoming with both a microsoft.com email address and an Indian mobile number. A brief Googling confirms the existence of a Pooja Patil with this phone number working for Microsoft to organise the Windows 8 Guiness World Record attempt in Bangalore.

Why would someone from Microsoft have told these two developers to submit their game multiple times? Were they really so desperate for apps that they encouraged this cloning? Were they really expecting that no one would notice?

Yesterday the blog author says two similar emails appears from these developers now denying that they were instructed by Patil to submit the apps:

at 6:05am I received 2 emails. Yes, at exactly the same moment. From Pavan and Kusuma. Both would now like to retract their previous comments about Pooja and would like it known that she’s great, and very supportive, and didn’t tell them to submit the same app over and over. It was all just a misunderstanding. Apparently.

Is all this made up? Not entirely, since you can verify that the apps mentioned exist, like these 28 apps by Nikhila Grandhi: 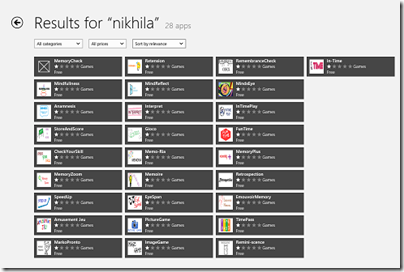 though it looks to me that some of the apps from Kusuma Sruthi have been removed suggesting that someone at Microsoft has noticed the issue and is trying to clean up.

Microsoft is a large company and although I was assured by Microsoft Store VP Antoine LeBlond that the new Store is not about the numbers, I can believe that some over-enthusiastic employees went too far in obeying some corporate directive to promote Metro-style app development and Store submissions.

That does not explain though why so many guidelines appear to have been ignored.

The company should do the right thing and clean out the rubbish.

Update: see also Drunk Compliance Tester. “The Windows 8 Store will continue to be a horrible experience for everybody if the level of quality doesn’t rise”