I attended an online seminar by Nokia’s Jure Sustersic on Windows Phone 8 development. It was a high level session so not much new, though Sustersic says the 7.8 update for existing 7.x Windows Phones  is coming very soon; he would not announce a date though.

The slide that caught my eye was one on how to make more profitable apps, including some intriguing statistics. In particular, according to Sustersic: 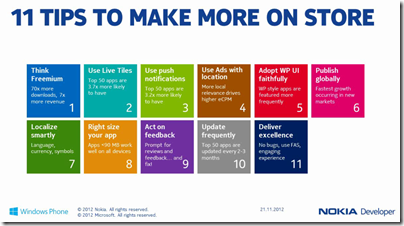 Of course what Windows Phone developers want most is a larger market, so for Nokia to sell more phones. Random reboots aside, Windows Phone 8 has been well received, but it an uphill task.

I covered the Windows Phone 8 development platform in summary here.

One thought on “Apps sell better with Live Tiles, says Nokia, with other tips for phone developers”