Adobe is reminding developers that Flash is still around as a game development platform, with the release of a Game Developer Tools package including a Gaming SDK, the Flash C++ Compiler which translates C++ to ActionScript, Flash Professional CS6 and Flash Builder 4.7.

The new thing here is the Scout profiler, previewed as Monocle, which is now available for Creative Cloud subscribers. Scout is a desktop app which profiles Flash apps that have telemetry enabled. The app has to be running in Flash Player 11.4 or higher and have Advanced Telemetry enabled for most of the features to work. You can analyse the time taken for ActionScript code to execute, CPU usage, rendering time for the Flash DisplayList, and record Stage3D commands (hardware accelerated 2D and 3D graphics).

Normally Scout analyses Flash content running on the same machine, but there is a companion agent that you can use on iOS and Android for remote profiling of mobile apps. 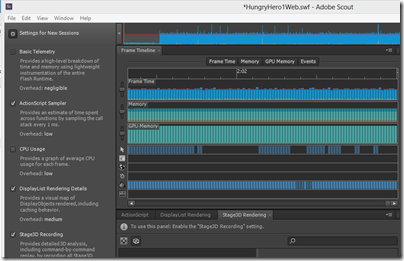 I downloaded and installed the Game Development but with only partial success, since I mainly use Windows 8 and the Flash Player there is behind that used on Windows 7 and Mac. The reason is that Flash Player is now updated via Windows Update, and this additional step seems to mean delays. I was able to try out Scout using Google Chrome, which has a Flash Player 11.5 installed, but have not yet figured out how to update the default Flash Player for the system which is used by Flash Professional and Flash Builder. At the time of writing this is Flash Player 11.3, which is insufficient for the Game Development Tools.

Flash is a strong platform for game development, though it has lost momentum now that Adobe is betting mainly on HTML 5. I also hear a lot about Unity for cross-platform game development. Unity lets you publish to Adobe Flash Player, giving you more choices than with pure Flash development.