Samsung’s Jun Dong-soo, president of the memory chip division, has likened Windows 8 to Vista and says it has failed to boost PC sales.

”The global PC industry is steadily shrinking despite the launch of Windows 8. I think the Windows 8 system is no better than the previous Windows Vista platform,” he said in a press briefing in Seoul, as reported by the Korea Times. [The link no longer works for me, though the article lives on in Google’s cache]. 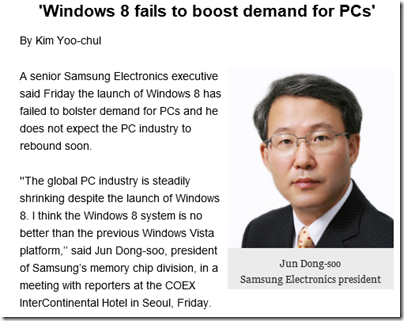 Equally, just as in the days of Vista, there is plenty of folk wisdom out there advising people to stick with the previous version of Windows, since the new one is more trouble than it is worth.

The parallel is not unreasonable then. Look a bit closer though, and there are as many differences and likenesses. I wondered if this could be expressed as a table, though no doubt there will be debate over the detail and other things that could be included.

The point of the above is both positive and negative for Microsoft. On the negative side, it has nobody but itself to blame for some of the problems around the launch of Windows 8. The Windows Runtime platform should have been in a better state for launch, the built-in apps should have been better (especially Mail), and despite ample evidence of the difficulty new users had when first encountering Windows 8, little regard was paid to the problem. OEM and retail partners then compounded the error by simply turning the handle and putting out a bunch of laptops with Windows 8 in place of Windows 7. I regularly see “Windows 8” displays where there is not a single touch-capable machine, which is extraordinary given that support for touch was the primary new feature and goal.

On the other hand, if you look at the pain points in Vista that were strategic rather than blunders, you can see that they did, eventually, succeed. Windows 7 builds on Vista and by general consensus is the best ever version of Windows. While I prefer 8 for various reasons, including its better performance and some useful UI improvements on the desktop side, Windows 7 has the more coherent and satisfying user interface.

The further implication is that the Windows 8 pain may yet prove worthwhile, if Microsoft can fix the annoyances and improve the Windows Runtime platform, and if OEMs can grasp the demand for Windows tablets when done right.

The difficulty with the above is that when Vista came out there was really nowhere to go, other than to the Mac for those looking for high-end personal laptops or desktops (and Vista was generally helpful to Apple). Windows 8 on the other hand has appeared at a time when the PC ecosystem seems under threat from the surge towards mobile and towards Android and iOS tablets. Even if Microsoft gets it right next time, it is unlikely to dominate as before.

4 thoughts on “Windows 8 is another Vista says Samsung memory guy: is he right?”