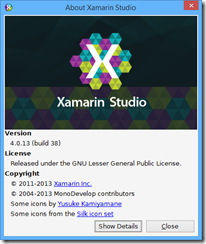 Yesterday Xamarin, which offers tools for targeting iOS, Android and Mac with C#, announced a partnership with Microsoft, an announcement which I wrote up on The Register. It drew a few comments, several complaining about the cost:

So it cost more then Visual Studio Pro.

And that is for 1 target platform?

Not so useful for little indie developers at those prices.

From open source to $999 per developer per year. Monetising Mono seems to have worked, so perhaps PCL being open sourced won’t be such a bargain either.

If you check Xamarin’s pricing you will see that the tools are not cheap for casual users; of course, if you are selling thousands of apps or developing corporate apps at normal rates the tools soon pay for themselves.

Xamarin is doing well as far as I am aware; CEO Nat Friedman told me of rapid growth in the number of customers and I have seen for myself the high interest in the tools at events like Microsoft BUILD earlier this year in San Francisco.

This gives me pause for reflection. What does the success of Xamarin, and the relative lack of success of Mono (the open source C# compiler and .NET Framework on which Xamarin is based) say about how well the open source business model works in the real world?

I was reminded of a conversation I had with Miguel de Icaza, creator of Mono and co-founder of Xamarin, Friedman back in February of this year, when Xamarin 2.0 was launched. I asked de Icaza if the new company publishes the source code for all its products?

Friedman added: “Mono has a thriving open source community around it, and Xamarin has a thriving community of developers who are building commercial mobile apps. We have 12,000 customers, many of them have never heard of Mono. They came to us because they had a problem to solve, they were C# developers and they wanted to get an iOS or Android app built. We solved that problem and that was worth money to them. The reason we have a business is that Microsoft developers do pay for tools, unlike Web developers for example. It’s been a great market for us. It allows us to invest.”

I asked de Icaza if he gets any grief from the open source community for having proprietary code in his company.

“Actually no. We started doing the proprietary bit at Novell. In fact we’ve been doing proprietary for a long time, even before we were acquired by Novell, at Ximian. We didn’t get a lot of grief from people. I can tell you though that when I was working in the Linux world, they were very stressful days for me, because people constantly complain about a “secret conspiracy” and that thing just went out of control. There are some advocates in the Linux world that don’t like anything that has the label Microsoft on.

“Ever since we did Xamarin which meant we focused on Mac and Windows, all that stress is gone, I don’t think I have ever been happier. In the past I was enduring this constant barrage of senseless attacks, and now I never hear about this.

“One thing that happened in the Linux world is that I was very proud of the four or five big apps that were built with Mono. F-spot that we built, Banshee, and a couple of others. Now with Xamarin I can’t keep track of them any more because they are measured in the thousands. There are thousands of very large apps, over a millions lines of code, that people send us. It’s a very different world, it’s just so much larger than all the work we did in Linux days back then.”

2 thoughts on “What does Xamarin’s success say about open source versus proprietary? Miguel de Icaza says he has never been happier”