There is something liberating about working without a keyboard – and I do not mean stabbing hopefully at a touch screen. Voice control means you can sit back, easily refer to books or papers,  and input text more quickly and naturally than is possible using a keyboard. Some conditions including RSI (Repetitive Strain Injury) may make dictation a necessity. I use dictation for transcribing interviews and for rapid text input generally. I do not often use dictation for controlling a computer, as opposed to entering and editing text, but this is also a key feature. 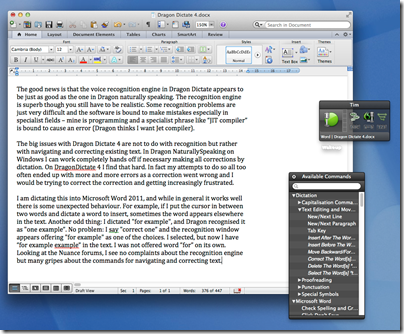 Nuance has the best voice recognition system available as far as I can tell, though my experience is mainly with Nuance Dragon NaturallySpeaking on Windows. But what about Mac users? For them, Nuance provides Dragon Dictate, which has recently been updated to version 4. It is not a port of Dragon NaturallySpeaking, but rather has its own distinctive features, though it is less comprehensive, and a glance at the Nuance forums suggests that Mac users feel a bit neglected.

Does Dragon Dictate 4 change that? The good news is that the voice recognition engine in Dragon Dictate appears to be just as good as the one in Dragon naturally speaking. The accuracy is superb though you still have to be realistic. Some recognition problems are just very difficult and the software is bound to make mistakes especially in specialist fields – mine is programming and a specialist phrase like “JIT compiler” is bound to cause an error (Dragon thinks I want “Jet compiler”). Similarly, “pull request” became “full request”. Over time you can build up a custom vocabulary, but recognition will never be 100%, so a dictation system has to handle corrections as well as original input.

Setting up Dragon Dictate involves installing the software and then letting it create a profile and doing some training so that Dragon can learn the characteristics of your voice. I highly recommend using a good quality headset since without it we cannot expect accurate recognition. I found the setup process quick and painless and was soon up and running.

Switching mode is easy: just speak the mode you want. If Dragon is in Sleep Mode, you can say “Wake up”.

My initial experience with Dragon Dictate 4 was not too good. The problems were not with recognition but rather with navigating and correcting existing text, which I found harder than in Dragon NaturallySpeaking on Windows. In fact my attempts to make corrections all too often ended up with more and more errors as a correction went wrong and I would be trying to correct the correction, getting increasingly frustrated.

Using Microsoft Word 2011, I experienced unexpected behaviour. For example, if I put the cursor in between two words and dictated a word to insert, sometimes the word appeared elsewhere in the text.

Another odd thing: I dictated "for example", and Dragon recognised it as "one example”. No problem: Dragon has a Recognition Window which lists alternatives when you say “correct” followed by the word you want to amend. I said "correct one” and the recognition window appeared offering "for example" as one of the choices. I selected it, but Dragon then entered “for example example” in the text. I was not offered the word “for” on its own.

Dragon Dictate 4 was rescued from a terrible review when I studied the manual. Towards the end is a section entitled “The Cache and the Golden Rule”. This explains that you should not combine the use of keyboard and mouse with dictation when editing a document. If you do, Dragon gets confused about the contents of the document and you see unexpected results. You can fix this with a special command, “Cache Document”, which tells the software to clear and rebuild the cache for the entire document.

If you are not aware of this issue, then you are likely to make increasing use of keyboard and mouse as Dragon gets it wrong, making the issue worse. That is exactly what had happened to me.

Another key point is the difference between training and correcting. If you use the Recognition Window to make a change that is not in fact a recognition fault – such as changing “good” to “excellent” – then you will confuse the voice training. Rather, you should say “Select good”, to select the word you want to change, and then say “excellent” to overtype it.

After studying the manual, I got much better results, though Dragon Dictate still occasionally seems to have a mind of its own.

Nevertheless, this fussiness is a weakness in the software. The best software works the way you want it to, rather than making the user do things a certain way. Why cannot Dragon do its cache repairs automatically in the background?

Still, what Dragon offers is of high value, and in this case if you want the best results you have to do the homework.

There are a few others things to mention. Nuance offers a free app for the iPhone that lets you use it as a remote microphone. Personally I find a headset more convenient but I guess there are scenarios where this is useful.

There are also features in Dragon Dictate aimed at general system control. I tried the MouseGrid, which overlays a grid over the entire screen and lets you zoom into the area of interest for accurate mouse control. You can also move the mouse using Up, Down and so on under voice control, and perform single, double or triple clicks.

Conclusion? The software does not feel as complete or as polished as Dragon NaturallySpeaking, but the excellent voice recognition means that this is the best available for the Mac. Recommended, but with reservations.