Microsoft will deliver Windows 8 Consumer Preview shortly, probably on February 29th, since it has been promised by the end of this month and there is a launch event at Mobile World Congress.

The name of the preview suggests that Microsoft intends this release to be broadly downloaded and tried, in contrast to the developer preview with its more specialised role.

In preparation for the preview I looked around for a suitable tablet on which to test it – noting that it must be a Intel x86 or x64 tablet, since the ARM build (WOA) is not for general release, but only for manufacturers.

WOA will not be available as a software-only distribution, so you never have to worry about which DVD to install and if it will work on a particular PC.

So what is available? A quick Twitter consultation turned up a few options, such as the Acer Iconia Tab W500, the Asus Eee slate B121, and the Samsung Slate 7.

However, of these only the Samsung is really suitable, because it has a 1366 x 768 display. The others have 1280 x 800, and while this will run Windows 8 and the new Metro user interface, it will not support the Snap feature which gives you two applications on screen together:

The resolution that supports all the features of Windows 8, including multitasking with snap is 1366×768. We chose this resolution as it can fit the width of a snapped app, which is 320px (also the width designed for many phone layouts), next to a main app at 1024×768 app (a common size designed for use on the web).

Unfortunately the Samsung Slate 7 is not fully released in the UK, though I did find it on offer at ebuyer.com, for the not too unreasonable price of £973.19. 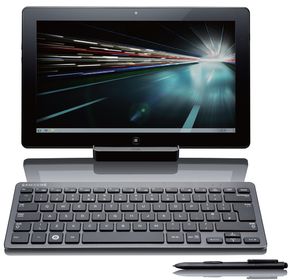 That is still expensive, and it is hard to see it becoming a mass-market bestseller as Windows 8 fans rush to try out the new OS.

The consequence is that most users will try Windows 8 Consumer Preview on a virtual machine, or on an ordinary PC or laptop, or possibly on one of the cheaper 1280 x 800 tablets.

Since Microsoft’s main focus with Windows 8 has been on the new Metro touch user interface, this will not show the new operating system at its best.

I can personally testify to this. The Samsung slate handed out at the BUILD conference last September, which I had on loan for a few days, was delightful to use, whereas Windows 8 Developer Preview (the same build) is nothing special in a virtual machine.

All will be well, one assumes, when Windows 8 launches with both ARM and Intel-based machines available. Nevertheless, it seems to me a significant obstacle as Microsoft tries to build pre-launch enthusiasm; the risk is that users will not take into account how much better it is on a real tablet.

Update: a few other options have been suggested, like the Dell Inspiron Duo, a convertible 10.1” tablet with an Intel Atom  N570 Dual Core, 1366 x 768 display and 2GB RAM, and around one third of the cost of a Slate 7, but perhaps under-powered to show off the best of Windows 8.

One thought on “Where are the tablets for Windows 8 Consumer Preview?”