I attended Microsoft’s Build conference last week where there was a big focus on Windows 10. I spent some time with the latest Build 10074 which came out last week as well attending various sessions on developing for the upcoming OS. I also spoke to Corporate VP Joe Belfiore and I recommend this interview on the Reg which says a lot about Microsoft’s approach. Note that the company is determined to appeal to Windows 7 users who largely rejected Windows 8; Windows 10 is meant to feel more familiar to them. 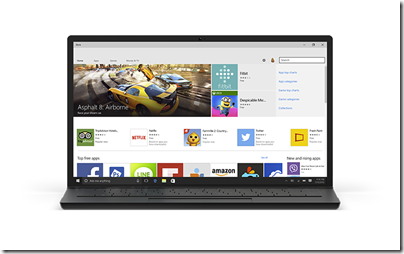 That said, Microsoft is not backtracking on the core new feature in Windows 8, which is its new app platform, called the Windows Runtime (WinRT). In fact, in its latest guise as the Universal App Platform (UAP) it is more than ever at the forefront of Microsoft’s marketing effort.

Why is this? In essence, Microsoft needs a strong app ecosystem for Windows if it is to escape legacy status. That means apps which are store-delivered, run in a secure sandbox, install and uninstall easily, update automatically, and work on tablets as well as with keyboard and mouse. Interaction and data transfer between apps is managed through OS-controlled channels, called Contracts. Another advantage is that you do not need setup CDs or downloads when you get a new PC; your apps flow down automatically. When you think of it like this, the advantages are huge; but nevertheless the Windows 8 app platform largely failed. It is easy to enumerate some of the reasons:

History will judge Windows 8 harshly, but I have some admiration for what Microsoft achieved. It is in my experience the most stable and best performing version of Windows, and despite what detractors tell you it works fine with keyboard and mouse. You have to learn a new way of doing a few things, such as finding apps in the Start screen, following which it works well.

The designers of Windows 8 took the view that the desktop and app environments should be separate. This has the advantage that apps appear in the environment they are designed for. Modern apps open up full-screen, desktop apps in a window (unless they are games that are designed to run full-screen). The disadvantage is that integration between the two environments is poor, and you lose one of the key benefits of Windows (from which it got its name), the ability to run multiple apps in resizable and overlapping windows.

Windows 10 takes the opposite approach. Modern apps run in a window just like desktop apps. The user might not realise that they are modern apps at all; they simply get the benefits of store delivery, isolation and so on, without having to think about it. 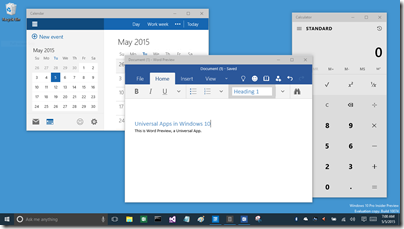 This sounds good and following the failure of the first approach, it is probably the right thing for Microsoft to do. However there are a couple of problems. One is the risk of what has been called the “uncanny valley” in an app context, where apps nearly but not quite work in the way you expect, leading to a feeling of unease or confusion. Modern apps look a little bit different from true desktop apps in Windows 10, and behave a little bit different as well. Modern apps have a different lifecycle, for example, can enter a suspended state when they do not have the focus or even be terminated by the OS if the memory is needed. A minimized desktop app keeps running, but a minimized modern app is suspended, and the developer has to take special steps if you want a task to keep running in the background.

Another issue with Windows 10 is that its attempt to recreate a Windows 8 like tablet experience is currently rather odd. Windows 10 “Tablet Mode” makes all apps run full screen, even desktop apps for which this is wholly inappropriate. Here is the Snipping Tool in Tablet Mode: 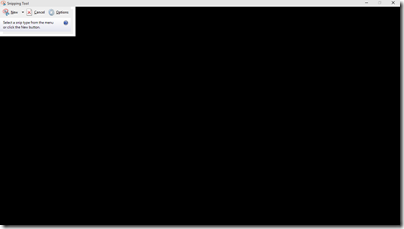 and here is the desktop Remote Desktop Connection: 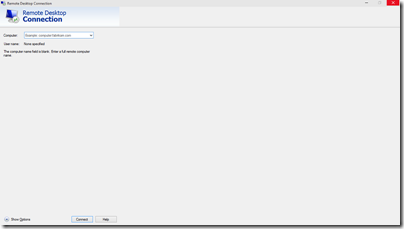 Personally I find that Tablet Mode trips me up and adds little value, even when I am using a tablet without a keyboard, so I tend not to use it at all. I would prefer the Windows 8 behaviour, where Modern apps run full screen (or in a split view), but desktop apps open in a window on the desktop. Still, it illustrates the point, which is that integrating the modern and desktop environments has a downside; it is just a different set of compromises than those made for Windows 8.

Now, I do think that Microsoft is putting a more wholehearted effort into its UAP than it did for Windows 8 modern apps (even though both run on WinRT). This time around, the Store is better, the first-party apps are better (not least because we have Office), and the merging of the Windows Phone and Xbox platforms with the PC platform gives developers more incentive to come up with apps. Windows 10 is also a free upgrade for many users which must help with adoption. Even with all this, though, Microsoft has an uphill task creating a strong modern app ecosystem for Windows, and a lot of developers will take a wait and see approach.

The other huge question is how well users will take to Windows 10. Any OS upgrade has a problem to contend with, which is that users dislike change – perhaps especially what has become the Windows demographic, with business users who are by nature cautious, and many conservative consumer users. Users are contradictory of course; they dislike change, but they like things to be made better. It will take more than a Cortana demo to persuade a contented Windows 7 user that Windows 10 is something for them.

Note that I say that in full knowledge of how much potential the modern app model has to improve the Windows experience – see my third paragraph above.

Microsoft told me in San Francisco that things including Tablet Mode are still being worked on so a little time remains. It was clear at Build that there is a lot of energy and determination behind Windows 10 and the UAP so there is still room for optimism, even though it is also obvious that Windows 10 has to improve substantially on the current preview to have a chance of meeting the company’s goals.