I attended day two (the developer day) of the Amazon Web Services Summit at the ExCel conference centre in London yesterday. A few quick observations.

It was a big event. I am not sure how many attended but heard “10,000” being muttered. I was there last year as well, and the growth was obvious. The exhibition has spilled out of its space to occupy part of an upper mezzanine floor as well. The main auditorium was packed. 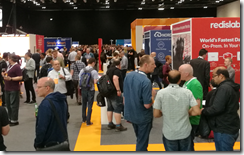 Amazon does not normally announce much news at these events, and this one conformed to the pattern. It is a secretive company when it comes to future plans. The closest thing to news was when AWS UK and Ireland MD Gavin Jackson said that Amazon will go ahead with its UK region despite the referendum on leaving the EU.

CTO Dr Werner Vogels gave a keynote. It was mostly marketing which disappointed me, since Vogels is a technical guy with lots he could have said about AWS technology, but hey, this was a free event so what do you expect? That said, the latter part of the keynote was more interesting, when he talked about different models of cloud computing, and I will be writing this up for the Register shortly.

Otherwise this was a good example of a vendor technical conference, with plenty of how-to sessions that would be helpful to anyone getting started with AWS. The level of the sessions I attended was fairly high, even the ones described as “deep dive”, but you could always approach the speaker afterwards with your trickier issues. The event was just as good as some others for which you have to pay a fee.

The sessions I attended on DevOps, containers, microservices, and AWS Lambda (serverless computing) were all packed, with containers perhaps drawing the biggest crowd.

At the end of the day I went to a smaller session on programming for Amazon Echo, the home voice control device which you cannot get in the UK. The speaker refused to be drawn on when we might get it, but I suppose the fact that Amazon ran the session suggests that it will appear in the not too distant future. I found this session though-provoking. It was all about how to register a keyword with Amazon so that when a user says “Alexa what’s new with [mystuff]” then the mystuff service will be invoked. Amazon’s service will send your service the keywords (defined by you) that it detects in the question or interaction and you send back a response. The trigger word – called the Invocation Name – has to be registered with Amazon and I imagine there could be big competition for valuable ones. It is all rather limited at the moment; you cannot create a commercial service, for example, not even for ordering pizzas. Check out the Alexa Skills Kit for more.

Presuming commercial usage does come, there are some interesting issues around identity, authentication, and preventing unauthorised or inappropriate use. Echo does allow ordering from Amazon, and you can optionally set a voice PIN, but I would have thought a voice PIN is not much use if you want to stop children ordering stuff, for example, since they will hear it. If you watch your email, you would see the confirming email from Amazon and could quickly cancel if it were a problem. The security here seems weak though; it would be better to have an approval text sent to a mobile, for example, so that there is some real control.

Overall, AWS is still on a roll and I did not hear a single thing about security concerns or the risks of putting all your eggs in Amazon’s basket. I wonder if fears have gone from being over blown to under recognized? In the end these considerations are not quantifiable which makes risks hard to assess.

I could not help but contrast this AWS event to one I attended on Microsoft Azure last month. AzureCraft benefited from the presence of corporate VP Scott Guthrie but it was a tiny event in comparison to Amazon’s effort. If Microsoft is serious about competing with AWS it needs to rethink its events and put them on directly rather than working through user groups that have a narrow membership (AzureCraft was up on by the UK Azure User Group).