I’ve been at GitHub Universe in San Francisco for the last few days. Around 1500 developers (not sure if that figure includes staff and exhibitors) in a warehouse at Pier 70. The venue was beautifully converted into an interaction space. Here is the view from outside as we were leaving; Octocat seems to be waving goodbye: 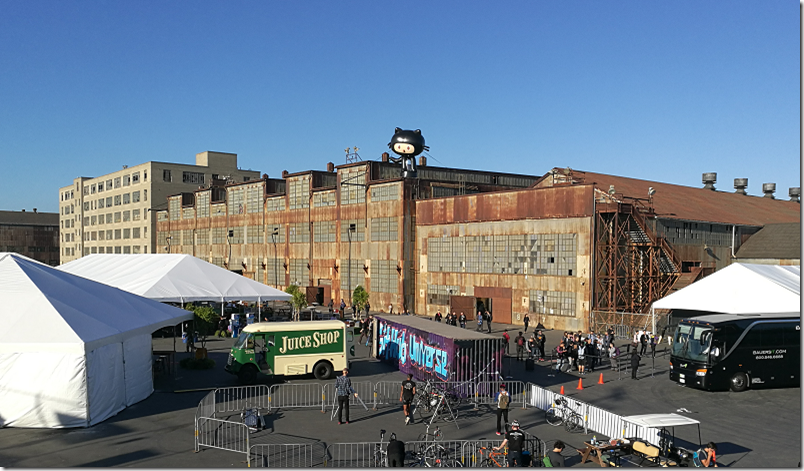 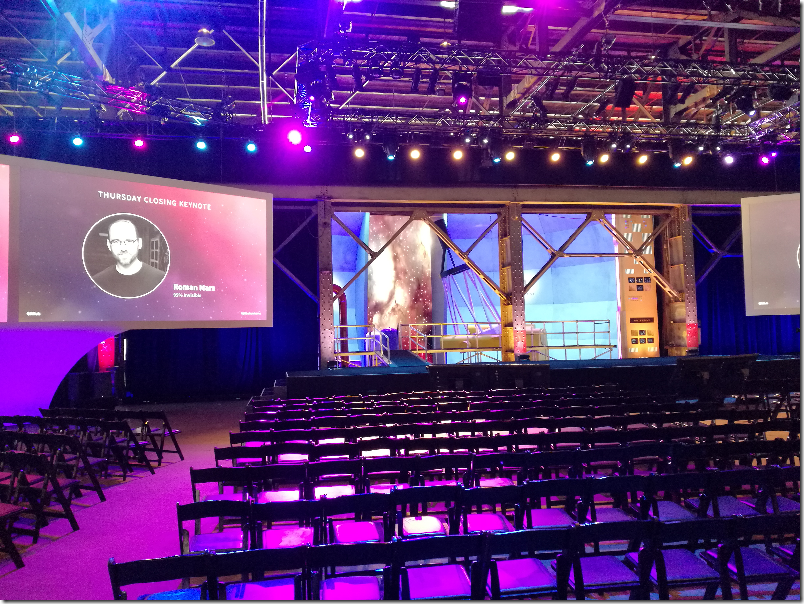 There was a large area for mingling, overseen by Octocat: 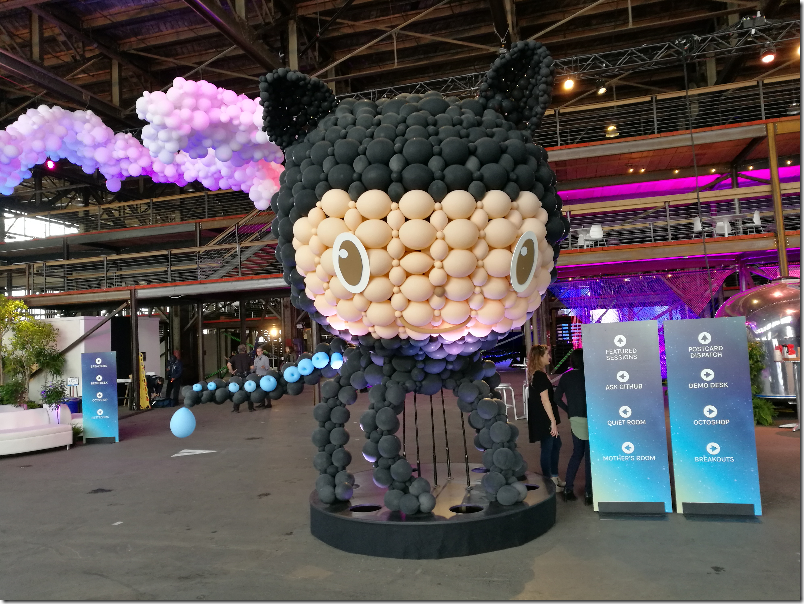 Plenty of space outside too, with a high standard of food and drink on offer. 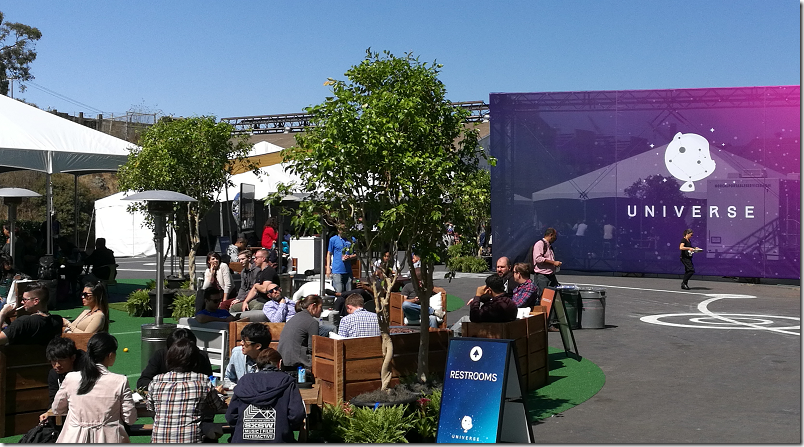 There was also a “send a postcard” area where you could write a card; with cards, pens, stamps and postbox supplied there was no excuse not to do so: 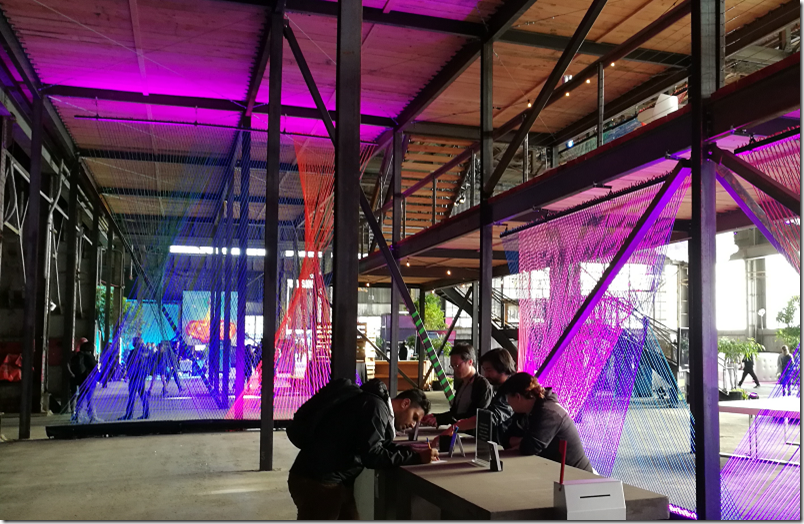 You are probably thinking, when do we get to the techie stuff; but in some ways it is better to look at the space GitHub created and ask what it tells you about the company.

Running an event like this is not cheap, and I think we can conclude that GitHub has a business model that works. Further, there was a generous and inclusive spirit to the event which was good to experience. Kimberly Bryant from Black Girls Code spoke at the opening keynote – the event concert was a Black Girls Code benefit – and while there is often an element of PR in the causes which businesses choose to sponsor, I don’t question the authenticity of GitHub’s efforts to promote both coding and diversity in our sadly imbalanced software industry. 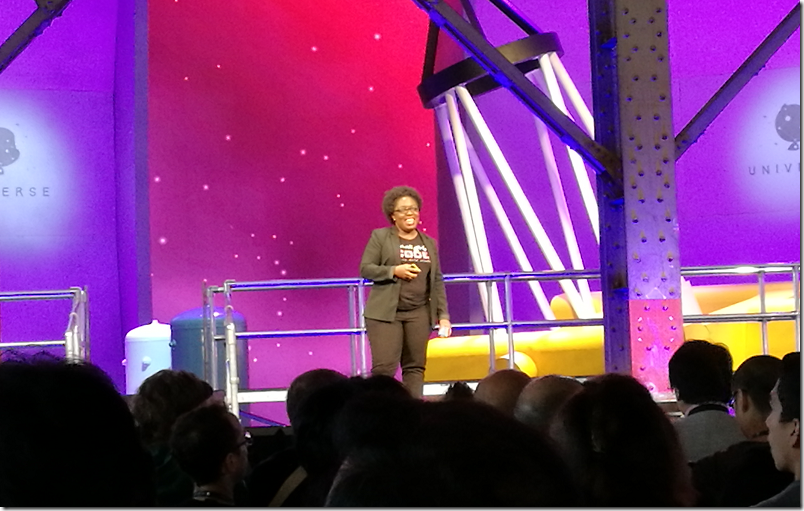 In some ways then the actual technical content was not the most important thing about this event. That said, there was some excellent content on themes including how GitHub scales its own service, new project management and code review features in GitHub, and how the product is evolving its add-in or “integrations” platform.

I also learned a bit about Electron, a framework for “creating native Desktop applications with web technologies” based on Chromium and Node.js. Microsoft’s Visual Studio Code uses Electron, as does GitHub’s own Atom editor.

If you are developer, you will be familiar with GitHub; it is the obvious choice for hosting an open source project (free) and a popular option for private repositories. When Google Code closed in 2015, the announcement cited the migration of developers to GitHub as the key reason and acknowledge that it was among “a wide variety of better hosting services” than Google’s own. “To meet developers where they are, we ourselves migrated nearly a thousand of our own open source projects from Google Code to GitHub,” remarked Google’s Chris DiBona. That was a pivotal moment, showing how GitHub has become a core part of the open source ecosystem as well as a strong commercial product for private and enterprise repositories.

GitHub does seem to take its responsibilities seriously and the fact that is has found a successful balance between free and commercial services is something to be thankful for.