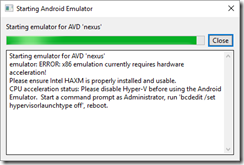 6 thoughts on “Microsoft needs to fix its Android emulator”