“Life on Mars?” has always been a favourite among David Bowie’s songs, and even more so since his death in January. Many have performed it as a tribute, not least by Lorde at the Brits Bowie tribute, Rick Wakeman (the pianist on the original) and Sarah Blasko.

A great song then; but one characteristic it shares with Queen’s Bohemian Rhapsody, another much-loved track, is that the lyrics are fantastically obscure, particularly in the second verse.

It’s a God awful small affair
To the girl with the mousey hair
But her mummy is yelling, “No!”
And her daddy has told her to go
But her friend is no where to be seen
Now she walks through her sunken dream
To the seats with the clearest view
And she’s hooked to the silver screen
But the film is a sadd’ning bore
For she’s lived it ten times or more
She could spit in the eyes of fools
As they ask her to focus on

Sailors, Fighting in the dance hall
Oh man! Look at those cavemen go
It’s the freakiest show
Take a look at the lawman
Beating up the wrong guy
Oh man! Wonder if he’ll ever know
He’s in the best selling show
Is there life on Mars?

It’s on America’s tortured brow
That Mickey Mouse has grown up a cow
Now the workers have struck for fame
‘Cause Lennon’s on sale again
See the mice in their million hordes
From Ibiza to the Norfolk Broads
Rule Britannia is out of bounds
To my mother, my dog, and clowns
But the film is a sadd’ning bore
‘Cause I wrote it ten times or more
It’s about to be writ again
As I ask you to focus on

Still, while Queen’s effort may veer towards pomp and nonsense I have nothing but respect for Bowie’s lyrical craftsmanship. I think we will struggle to make perfect narrative sense of the song but nevertheless there may be some insights to be had.

What does Bowie himself have to say about it? The back cover of Hunky Dory, the album from which the song comes, states “Inspired by Frankie”, a reference to Frank Sinatra. The contemporary advertisement for the album adds more handwritten notes on the song, this time “A sensitive young girl’s reaction to the media.”

Then there are the notes on the song for the 2008 iSelect compilation:

This song was so easy. Being young was easy. A really beautiful day in the park, sitting on the steps of the bandstand. ‘Sailors bap-bap-bap-bap-baaa-bap.’ An anomic (not a ‘gnomic’) heroine. Middle-class ecstasy. I took a walk to Beckenham High Street to catch a bus to Lewisham to buy shoes and shirts but couldn’t get the riff out of my head. Jumped off two stops into the ride and more or less loped back to the house up on Southend Road.

Workspace was a big empty room with a chaise lounge; a bargain-price art nouveau screen (‘William Morris,’ so I told anyone who asked); a huge overflowing freestanding ashtray and a grand piano. Little else. I started working it out on the piano and had the whole lyric and melody finished by late afternoon. Nice.

Another key reference is this interview from around 2002, specifically about the making of “Life on Mars?”

In this interview, Bowie tells the story of how he was asked to write an English lyric for a French song, called Comme D’Habitude (rough translation, “As Usual”).

The original song, entitled Pour Moi (“For Me”) was written by Gilles Thibaut (lyrics) and Jacques Revaux (music) and offered to singer Claude François. The lyrics and music were adapted by all three, renamed Comme D’Habitude (rough translation, “As Usual”), and the song became a break-up song related to the ending of the relationship between François and the young Eurovision winner France Gall.

Bowie translated the song as Even a Fool learns to Love, and you can hear a snippet of his version in the interview above, but François rejected his lyrics. (Bowie adds that it was “a godawful lyric. Dreadful”).

Comme D’Habitude describes a relationship near its end; he is still in love but they see little of one another as he goes to work before she gets up (“Quietly I leave the house. Everything is grey outside. As usual”) and is in bed before she returns. “All alone, I’ll go and lie down in this big cold bed, as usual”. They make love but he is “playing at pretending”.

Bowie translated the song as Even a Fool learns to Love. His version is also about a relationship gone sour, but tells the whole story, about a man who is the life and soul of the party (“a fool”), meets a girl, falls in love (“a clown and an angel so much in love”), but the joke “turns stale” and the time when even a fool learns to love becomes a “sour time”.

“The next time I heard it, it was My Way by Frank Sinatra,” says Bowie. François had rejected his lyrics, and Paul Anka had come up with My Way.

“I was really pissed off. It should have been my song. So I thought, OK I’ll write my own version. So it’s My Way on Mars,” says Bowie.

“Inspired? It was more revenge.”

“Life on Mars?”, while not exactly a relationship song shares with Comme D’Habitude a sense of discontent with life and reflection upon it.

Actually the opening lines do suggest a relationship “a godawful small affair”, one that is unacceptable to mum and dad. The girl goes out, like the man in Comme D’Habitude, into a grey and sad world. Her friend (boy or girl?) cannot be found.

Bowie’s song then departs from the script, exploding into a kaleidoscope of images as the mousy-haired girl stares at the cinema screen. Yet this does not rescue her: she sees clearly that the fantasy world of entertainment will do nothing to change the greyness of her world. Mickey Mouse is not a real friend; he grows up “a cow” and whatever that means it is not flattering.

The song becomes surreal as Bowie plays with reality.

Is there Life on Mars? Wait a moment, how did Mars get into this song? Bowie is playing with us of course. Let’s look at a few shades of meaning:

2001 A Space Odyssey, part inspiration for Space Oddity, “look at those cavemen go”, and note the little quote from Also Sprach Zarathustra as the song fades. The film’s central character goes to Jupiter not Mars, but hey, it’s all space; and like Space Oddity, inner space as much as outer space. Is there life there? Maybe, but it’s pretty desolate.

Life on Mars is a B movie too, cheap sci-fi. It’s escapism but not life, not real life.

Is there life on Mars? is a question of yearning, because there is no life on earth, or it seems that way in our most desolate moments.

Bowie tells us that this kind of interpretation is not too far off. In 1998 he was interviewed by Alan Yentob for the BBC, in a kind of follow-up to Yenton’s earlier documentary Cracked Actor. 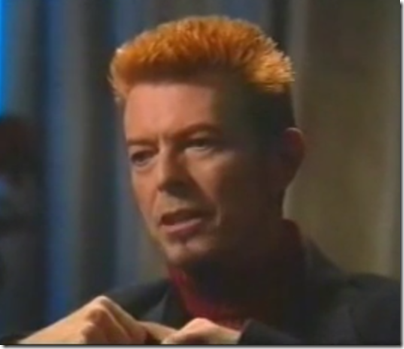 “She may be an ordinary girl,” says Yentob, “but isn’t she as alienated as any of your other characters?”

“I think she finds herself let down,” Bowie replies. “I think she finds herself disappointed by reality. I think she sees that although she’s living in the doldrums of reality she’s been told that there’s a far greater life somewhere, and she’s bitterly disappointed that she doesn’t have access to it. It’s very hard to think back to one’s state of mind 25 years ago. I guess I would feel sorry for her now, I think I had empathy with her at the time. That’s probably the difference.”

When asked in the 2002 interview referenced above about whether the song is about alienation, he says:

“A lot of it is. One’s interior kind of isolation as well. It doesn’t just mean one’s social isolation, it can mean how you get in contact with your own feelings. It can be quite personal in that way.

“My subject matter hasn’t really changed over the years. I’m still in a way writing about life on Mars, all these years later. (Laughs). And the man who sold the world … the way that I present songs has changed a lot. And the style for each album has changed considerably. I’ll often try new rhythms and kinds of arrangements. It’s like, I want to keep writing about the same subject but my approach, it’s like I’m trying to get into it, like finding a different door each time I approach that same subject.”

Can we go further, and examine the lyrics with more precision? It is difficult because the song is deliberately surreal; yet there are intriguing connections which may or may not be intended. Is it Lennon (“Power to the People”) or Lenin who is on sale again? Bowie with his love of word play likely intended both meanings.

What about “The workers have struck for fame?” In 1941, there was a famous strike by Disney’s (“Mickey Mouse”) animators. One of their grievances was lack of credit for their work:

“To add insult to injury, the animators weren’t featured in the credits of the film, with all credit going to the owner of the studios himself, Walt Disney.”

Bowie however did not want to explain everything. Mick Rock, who worked with Bowie on a video for the song, says:

I would not be so presumptuous as to try and put any meaning on it. Certainly David Bowie never has as far as I know. I don’t know what it means. But it means a helluva lot to me, it’s like a poem by Rimbaud, say, what does it mean? Intellectually it is very hard to define. You can only say, I love it.

I would not go so far as Rock; Bowie has given plenty of clues about his intent in writing the song. At the same time, he enjoyed leaving room for the listener’s imagination and participation, referring to the French painter Marcel Duchamp and approving in this interview with Jeremy Paxman:

The idea that the piece of work is not finished until the audience come to it and add their own interpretation, and what the piece of art is about is the grey space in the middle.

However you look at it though, it is a pretty gloomy lyric. Why do we like it? Well, it is witty, it is evocative, it is mysterious; and the music absolutely soars, complete with unexpected key changes and a near-octave leap from “on” to “Mars”. Like all the best music, it takes us out of ourselves to another place and makes our reality a little less grey than it was before.

Thanks to members of the Steve Hoffman Music Forum for assistance with puzzling out this song, and to author Nicholas Pegg for the source of the quote from the Yentob interview, which he also references in his book The Complete David Bowie.