The Wigwam Hifi Show is an unusual event, in that most of the exhibitors are not vendors with their latest and shiniest, but enthusiasts showing off their own systems. It is a lot of fun, with plenty of exotic and/or old equipment that you will not see or hear elsewhere. 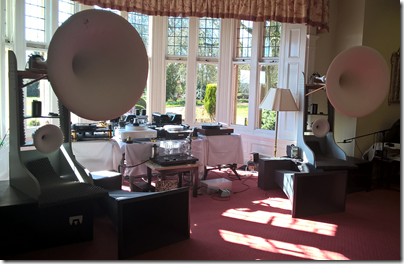 I have exhibited at the show in the past, and try to do something a little different each time. This year I thought it would be interesting to contrast the many multi-box and expensive systems with something at the other end of the scale. I was impressed when I reviewed the IQAudio Pi-DigiAMP+ for issue 36 of the MagPi magazine, so I took it along.

This unit is a board that plugs in on top of the main Raspberry Pi board. 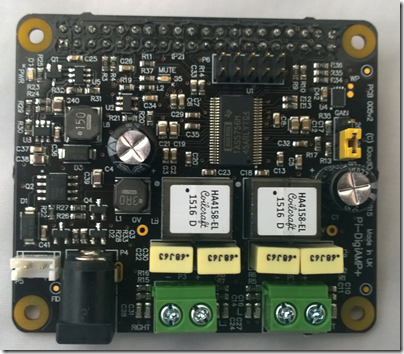 It is very simple, the only external connectors being power in, and left and right speaker terminals. It includes a DAC and a class D amplifier, based on the Texas Instruments (TI) TAS5756m chipset. The DAC is based on a Burr-Brown design.

I assembled my unit using a Raspberry Pi 2, the above board, and the matching case and power supply from IQ Audio. The power supply is the XP Power VEF50US15 which means I get up to 2x20w; if you use a VEF65US19 you can get 2x35w (both available from the IQAudio site).

Here it is in the room at Scalford Hall, home of the Wigwam event. 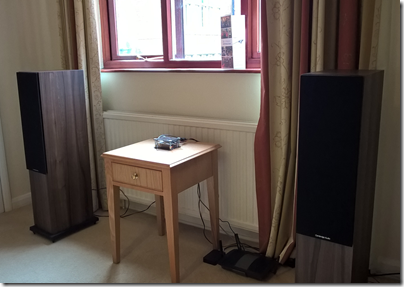 The speakers shown are the Cambridge Audio Aero 6, though we also had a pair of Quad 11L and tried them both.

The way things work at this event is that you sleep in your room the night before, and the next morning the bed is removed and it becomes your exhibition room. Having tried the system with the bed in place, I was distressed to find it sounding markedly worse (bloated bass) once the bed was removed. With no time for proper experimentation we dragged the mattress back out of the cupboard and leant it against the wall, which improved matters; we also used foam bungs in the speaker ports to tame the bass. Not ideal, but shows the difficulty of getting good sound at short notice in small hotel rooms.

The Cambridge Audio Aero 6 speakers I would describe as a good budget choice; they sell for around £350. Philosophically (as with the Quads) they are designed to be clean, detailed and uncoloured. The choice of floorstanders rather than small standmounts was deliberate, as I wanted to demonstrate that using a tiny amplifier does not necessarily mean a small sound.

Having said that, we also put the Quads on from time to time, which are small standmounts. The sound was not radically different, though bass extension is less and to my ears the 11Ls are a little less precise than the Aeros, with a warmer sound. I preferred the Aeros but as ever with loudspeakers, tastes vary.

If I were buying today, I would recommend the new Raspberry Pi 3 and the more powerful 19v power supply which increases the cost by about £10.00.

So that is between £125 and £135 for the complete device, and then whatever you choose for the speakers.

For the demonstration I brought along a router with wi-fi, to which I attached a hard drive with lots of FLAC files ripped from CD, along with a few high-res files. The router lets you attach a USB drive and share it over the network, so I configured Volumio on the Pi to use that as its source. In a typical home setup, you would probably store your music on a NAS device and use your existing home network.

There was a steady stream of visitors from around 10.00am to the close of the show at around 17.00. The goal was not to be the best sound at the show, but rather to be the smallest and still deliver decent sound quality, and for many visitors I think we succeeded. We stuck the equipment list on the wall and lots of people photographed it with the intention of looking into it further. 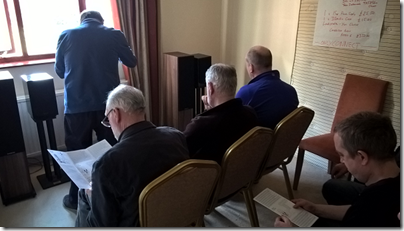 A demo under way: spot the mattress leaning against the wall and the smaller Quad speakers alongside the Cambridge Audios.

A number of visitors knew of, or were even using, a Pi for streaming, but the idea of having the amplifier included on a small board was less familiar; it was fun when people asked where the amplifier was, or whether the speakers were active (they are not). Some were really astonished that you can get respectable sound quality from such a small box.

Volume was more than sufficient for a room this size and frankly plenty for most home situations though of course not for huge rooms or loud parties.

Note that despite playing loud throughout the day the amp board did not get warm at all; this is because a Class D design delivers almost all the power supplied as output to the loudspeakers.

A few early comments from the forums:

“The super small Raspberry Pi based system by onlyconnect was a brilliant demo of what can be achieved by something tiny and low cost.”

“I wouldn’t have thought it possible if I hadn’t have heard it… To boot, completely taking price out of the equation, it was one of the better sounding systems at the show to my ears, I enjoyed that more than some far, far more expensive rigs.”

“Highlights. Onlyconnect’s raspi based system, honestly why pay more for music around the house?”

“Onlyconnect’s Raspberry system was impressive and wins the GVFM award.”

“Onlyconnect’s mini/budget system – just amazing how good a £125 raspberry pi setup containing streamer, dac, preamp and 35w per channel amp could sound. I can’t forget how flabbergasted another listener was to discover the total system cost  -” I’ve obviously doing it all wrong all these years”

“I spent a while looking for the amplifier, following the cables etc like everybody else. I was impressed by the sound coming out of the Cambridge Audio speakers, I would certainly put this in the top 40% of rooms based on the sound quality, maybe higher.”