This book describes itself as the “first published project to emerge from the Institute for Bob Dylan Studies at the University of Tulsa”. This institute is linked to the Bob Dylan archive which assembles over 100,000 items including audio and video recordings, essays, poems, photographs, correspondence and more. The archive has Dylan’s support and he described it as “a great honour.” The purpose of the archive is both public display and academic research. Sean Latham, editor of this title, is director of the institute as well as a professor of English at the adjacent University.

Latham says the purpose of the book is to get different perspectives on “understanding the depth, complexity and legacy of Dylan’s music, while at the same time setting out an entirely new agenda for writing, research and invention.” That second goal sounds ambitious and I am not sure exactly what Latham means, except insofar as academic writing about pop music still seems something of a novelty. There is always that question: are we taking all this too seriously? Those of who have grown up with Dylan’s work are too close to it to know; we may in fact be at some kind of “peak Dylan” as the adolescents of the sixties and seventies are now the professors and writers – and yes, there are plenty of professors here, seventeen if I counted them right, along with a journalist or two, and Dylan fan and author Andrew Muir. The Dylan of Ballad of a Thin Man didn’t have much time for professors, but hey, the times they are a changin’.

There are 27 essays here, with five sections: biography, the musical genres Dylan drew on, Dylan’s work and its place in culture, political contexts, and finally Dylan’s legacy. The title, by no coincidence, is the same as that of a 4-day symposium that took place at the end of May 2019, and some of the material, such as the chapter by Griel Marcus, is drawn directly from that event.

We kick off with a rather selective chronology, then Andrew Muir takes us through the biographies: Scaduto, Shelton, Spitz, Heylin (“it so far outclasses its predecessors that it might as well be the first”), Sounes, and mention of some others. Enjoyed this. Then we get Latham on Dylan’s songwriting, a challenging topic, and a piece that to me does not quite capture its subject. Then comes a chapter on Dylan’s singles, or ten of them: I couldn’t make sense of this one, why include Tangled up in Blue, which is hardly single material even though it was a (rather unsuccessful) one, but not Lay Lady Lay or Knockin’ on Heaven’s Door which work well as singles? And that is it for Part 1.

Part 2 on genres opens with an essay on folk music by Ronald D Cohen, then Griel Marcus on the Blues, based on his lecture. The Marcus piece is a bit odd in print, not least because it says “Bob Dylan’s Lovesick Bournemouth October 1 1997 plays.” There is always YouTube.

The third section is the best. Here we get Raphael Falco on Dylan’s visual arts; interesting because Falco is a professor of English writing a book on Dylan and Imitation: Originality on trial, and he picks up on the fact that many of Dylan’s paintings are based not on what he saw on his travels, as he claims, but on photographs or pictures by other people. “Dylan’s paintings of photographs that are themselves paintings provoke new (and largely overlooked) questions about imitation as an aesthetic practice,” writes Falco. This is followed by a chapter specifically about borrowing, by Professor of English Kevin Dettmar, author of the Cambridge Companion to Bob Dylan. Dettmar is perhaps needlessly verbose, but I did enjoy it when he wrote “Although the release of Love and Theft perhaps represents the apex of Dylan’s intertextual creative process, it also coincided with the burgeoning corpus of searchable online digital texts and the growing sophistication of the Google search engine, under whose scrutiny the songwriter’s entire catalog has been revealed to be full of patches and duct tape.”

There are two chapters on Dylan and religion, one on Judaism by Elliot R Wolfson, and one Christianity by Andrew McCarron, author of a book on Dylan’s “religious identities.” I enjoyed them both; and liked that McCarron by no means focuses only on Dylan’s most overtly evangelistic phase but writes about “a man whose connection to God has changed as he has aged,” calling his chapter “An Exegesis of Modern Times”, a 2006 album. McCarron also, correctly I believe, observes how Dylan combines sexuality with spirituality and infuses women with holy powers; though it seems this did not always ensure good behaviour towards women which might have been an intriguing thread to follow.

The sections on politics and on legacy did not work so well for me; but I was interested in the final chapter, by Mark A Davidson who is Archives Director of the American Song Archives in Tulsa including the Bob Dylan Archive. Tulsa, he notes, has become the “center of the Bob Dylan universe,” quoting an article in Rolling Stone, and in one sense it is hard to disagree.

Oddly, this is also my biggest disappointment with The World of Bob Dylan, that there is relatively little here in terms of examination of the archive. There are occasional intriguing remarks like “in the case of a song like Jokerman, from his 1983 album Infidels, Dylan wrote and revised the song over the course of nineteen pages; “ I would love to know more about this, and will look forward to future books that explore some of these newly uncovered artistic treasures.

The World of Bob Dylan, like most collections of essays, is good in parts, and an effective taster for further work from some of the authors included.

If you are in London before 30 November 2018, and any kind of Bob Dylan fan, then I highly recommend Mondo Scripto, an exhibition of his drawings and Iron Works gates. 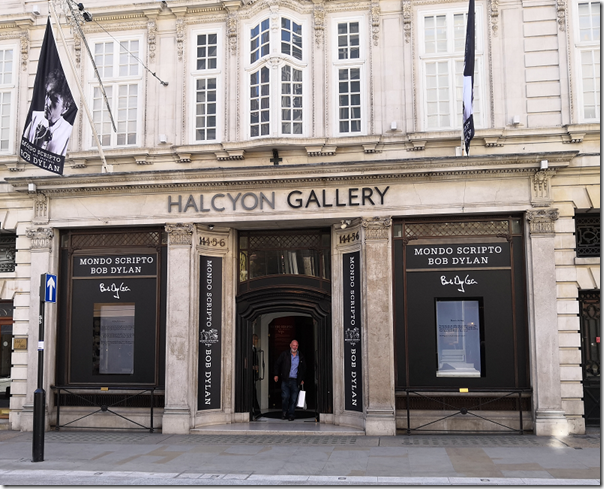 Let’s start with the Iron Works. Way back in 2001 Dylan began constructing gates from scrap metal, as gifts for friends or for his own property. “Gates appeal to me because of the negative space they allow. They can be closed but at the same time they allow the seasons and breezes to flow. They can shut you out or shut you in. And in some ways there is no difference,” he says.

Iron is part of Dylan’s history because he was born and brought up in Hibbing, Minnesota, Iron country and near a large open pit mine. So for Dylan it is a return to roots as well as another way to exercise his creativity. His Iron Works were exhibited at the Halycon Gallery in London in 2013, and you can see them now peppered around the display of drawings and paintings in the current exhibition.

The gates look strong but quirky, symmetrical in some ways but not in others, painted in subtle shades that bring out the metalness and variety. There are gear wheels, chains, spanners at odd angles, animal shapes, pliers, roller skates, wheels and springs all jumbled together but making a cohesive whole. Somewhat like the way he uses language in his songs. 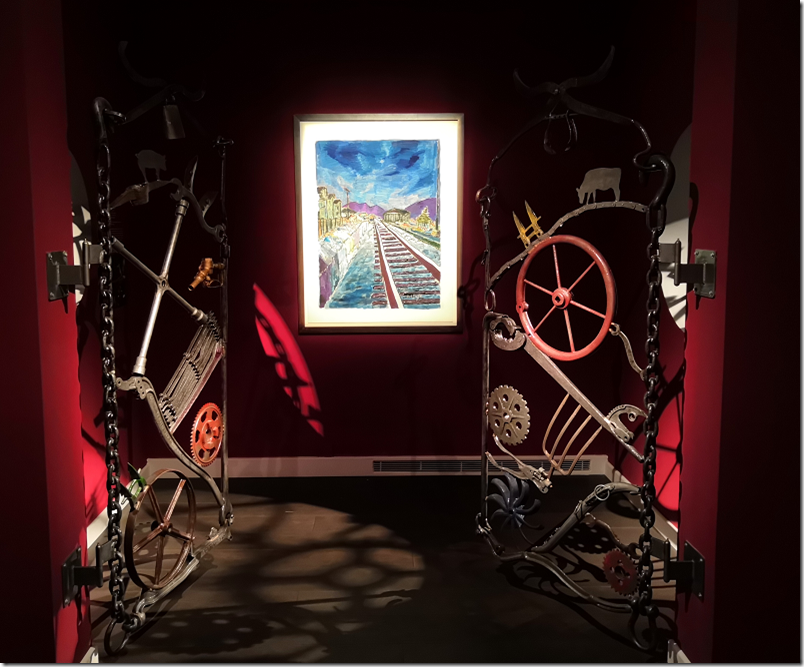 But what of Mondo Scripto? Dylan has taken 64 songs, written out the lyrics in blocks (so they are not particularly easy to read), and illustrated each one with a drawing. For example, here is one that I like, Just Like a Woman: 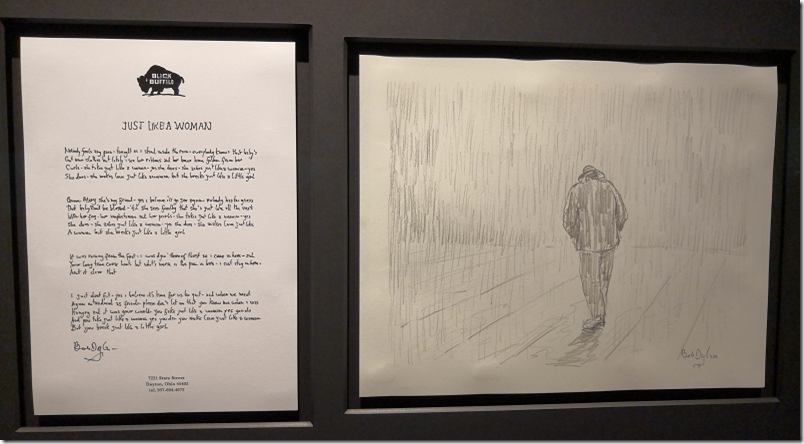 Maybe you would expect to see a woman in the drawing; but no, this is the line “as I stand inside the rain.”

Note that the exhibits at the Halcyon Gallery are the actual drawings, not just the signed prints you can buy for £1895 each (10 songs, limited editions of 495 for each song).

I am not much interested in the collector’s aspect here. I think that is a lot of money for a print and a signature. The orginals also look much sharper and better than the prints, which is disappointing if you have the print. You may be able to negotiate to buy an original but it will cost a lot more. I would quite like one of my favourites on the wall, or a Dylan gate in the garden, but the cost is too steep for me; if I were wealthy enough for it to be spare change, perhaps I would. Then again, the profits are enabling this amazing exhibition which is free to attend so it is not so bad.

What I am interested in is the choice of songs, the choice of images and the way they are executed, and little details like small changes in the lyrics. For example, Ballad of a Thin Man in the original:

and in Mondo Scripto:

I was intrigued to see that in Subterranean Homesick Blues, Dylan has written out:

which is the latest chapter in a story; the original is “don’t tie no bows” but via humour and mis-transcription has become what it is. Maybe Dylan just copied it, maybe he likes it better now, who knows?

This is Dylan so there is variation everywhere. You can get a nice book/catalogue of Mondo Scripto for £45 (this one is a good buy), and this includes 60 songs written out with their drawings. However many of the drawings are different to those in the exhibition. Apparently the book was done first so those are the earlier versions. Just like Tom Thumb’s Blues, for example, has a bottle of wine in the book (“I started out on Burgundy”) and a cityscape in the exhibition (“Back to New York City”?).

Knockin’ on Heaven’s Door has special treatment. This has been done as a series of 16 drawings, pen drawings rather than pencil sketches, including a variety of different doors and techniques for knockin’ on them. It begins with a hand knock, and ends with a rap from a cross. There is also a drill, a crowbar, a bottle, and so on.

Lovely humour, but also a meditation on death? Possibly, though Dylan has been singing about death at least since Fixin’ to Die on his very first album, so we should not take this as any kind of final statement.

It is nevertheless true that Mondo Scripto is Dylan’s reflection on his best-known songs, made new by drawings which bring out a striking image or thought and which reminds you how extraordinary they are.

One of the features of this beautifully laid-out exhibition is a wall of books, some by but mostly about Dylan. 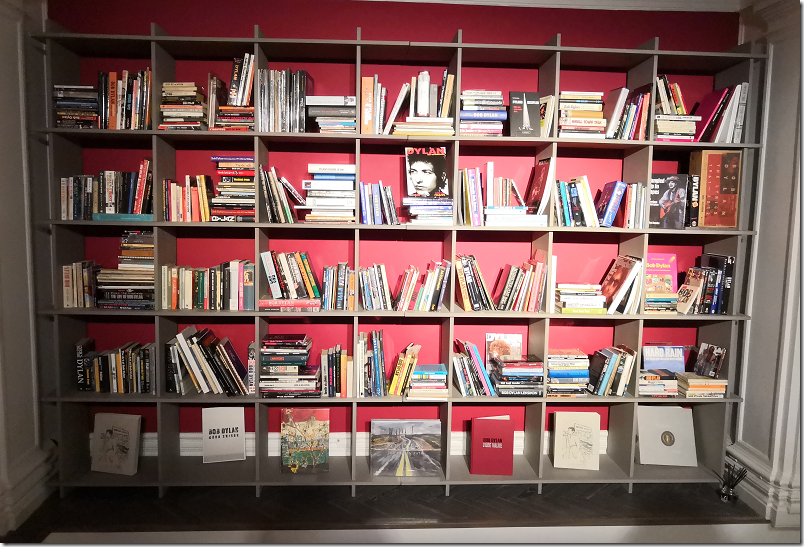 It is a reminder of how many of us have been entertained, absorbed and challenged by this body of work.

Mondo Scripto along with the Iron Works are remarkable, coming from a man who also tours incessantly and is of an age where many of us sit around doing nothing much at all. 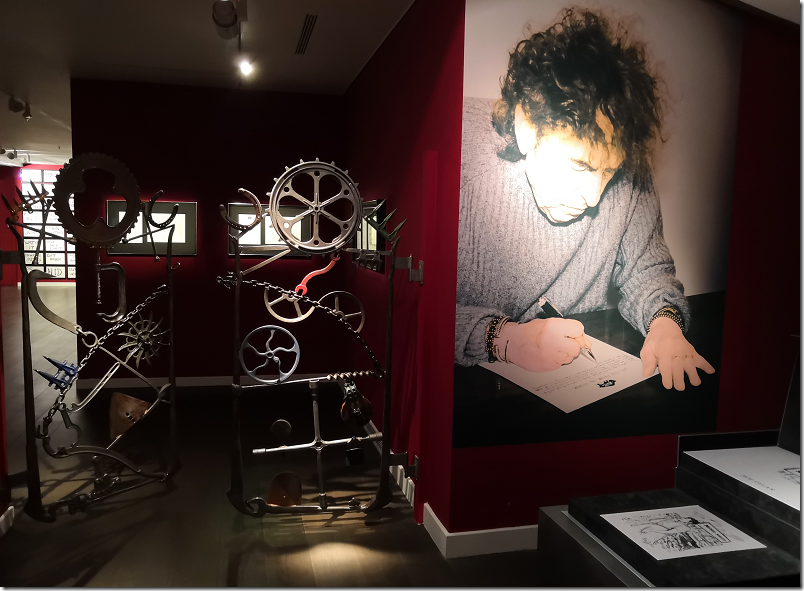