It is one of those days when separate announcements reinforce a single message.

On the technical side, we’ve had Adobe’s announcement, here at MAX in Los Angeles, of Flash Player 10.1 which will bring hardware accelerated HD video to a number of smartphones, including Windows Mobile, Palm Web OS, Google Android and Symbian. Blackberry maker RIM is also on board. Spot the missing Smartphone – though who knows, there could be an Apple-shaped announcement too at any time.

Users on the other hand do not care what software is delivering their video, they just want it to work. England’s numerous football fans will care even more about that now, since the forthcoming World Cup qualifying match with Ukraine will apparently be shown only on the Web, on a pay-per-view basis. Actually it is not quite web-only; you can also to out to watch it in the cinema, harking back to the days when few had TVs at home:

Fans will be asked to pay between £4.99 and £11.99, depending on when they sign up, to watch the match on their computer and it will also be screened in selected Odeon cinemas.

I’m particularly interested in the developer angle. Web video is programmable, and where Flash goes, so too goes the ActionScript runtime. One angle is social media, which the BBC talked to me about at the end of last year in the context of iPlayer. It will be fun to see this and other innovations as the possibilities opened up by web broadcasting sink home.

This is an excellent read, though it was not what I expected from the title. It is written by three people who are always forthright, sharp and insightful, and who live on the Web: James Governor, Dion Hinchcliffe and Duane Nickull. Nickull works for Adobe, and the book labelled as part of the Adobe Developer Library, but don’t let that put you off if you are a Java guy, or a PHP developer, or a Microsoft Platform person: this is about concepts and patterns, not specific products.

So why was it not what I expected? Well, I thought it might focus on the challenge of developing highly distributed applications, looking at what it takes to make such applications reliable, performant and scalable. I know even from my own dabblings that decisions about where to locate different pieces of logic and handling things such as authentication, transactions and security are tough problems with which many of us need help. However, this title rarely descends to that level of detail – though it is a little unpredictable in that respect. The authors do find space, for example, for several pages on common mistakes in designing web forms, reflecting I imagine their level of frustration at how often they encounter them. Inconsistent, yes; but forgivable.

As you read the early chapters you feel that this is all leading up to something big. That’s correct, but again it might not be what you expect. In fact, this feels like an introduction to a much longer book that is yet to be written, a fault which can only be excused by the idea that it is you, not they, that have the task of writing it.

Here’s a short extract from a section called The Timeless Way of Building Software: Inspiration for the next generation of Web Software:

Take a look at some of the great web software, such as Google’s search page, Flickr, or Delicious. They all have that unique yet unhurried grace that comes from perfect ease and natural balance. But what do they have in common exactly? They are beautiful, ordered and harmonious. But especially, and what strikes to the heart, is that they live. They are the perfect blend of logic and emotion, of the machine and the human experience, intrinsically intertwined and symbiotically embracing each other.

If you find this excessively rhapsodic you will probably not like this book. Note the title though: this is a Web 2.0 book as well as an architecture book; and a couple of pages on from the above quote we learn the significance of that:

…this timeless way of software architecture represents a more complete reconceptualization of what we thought we knew. We can give this place, where common sense and logic collide with humanity and society, a name.

And that is pretty much how it ends.

Overall it’s a great read, written I suspect in haste, accounting for the odd sloppy phrase or two, but always fluent and enjoyable. Recommended for those who are thoughtful about what it means to do software today.

View on Amazon.com: Web 2.0 Architectures: What entrepreneurs and information architects need to know

View on Amazon.co.uk: Web 2.0 Architectures: What entrepreneurs and information architects need to know

I’m in Los Angeles for Adobe Max and saw this roadside ad for the iPod Touch. 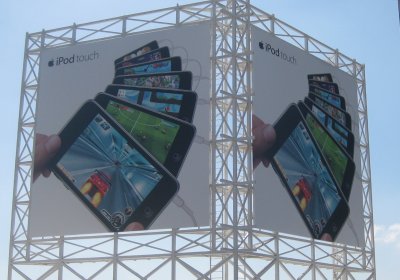 Music not mentioned. It’s fascinating to see how the device and brand has morphed since its first release.

The Future of Web Applications conference in London is always a thought-provoking event, thanks to its diversity, independence and character. That said, it is a frustrating creature at times. The frustration on day 1 was the barely functional wi-fi, which ruined a promising interactive application called HelloApp, built with ASP.NET MVC. HelloApp would have told us who we were sitting next to, what their interests were, their twitter ID and so on. Microsoft must be disappointed since the developers, some of them more used to technologies like PHP and Ruby, said how impressed they were with the framework and Visual Studio. The poor connectivity was a shame, and a bad slip-up for a web application conference. Even the speakers had to work mostly offline – cloud devotees beware. 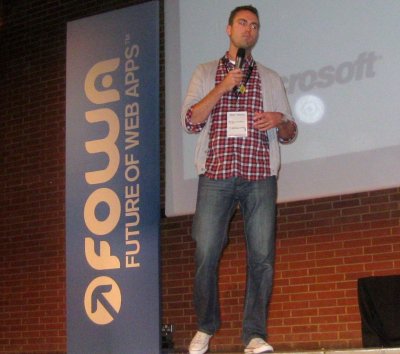 FOWA has been at London Excel recently, but this event was back to its earlier venue of Kensington Town Hall, more crowded but a better atmosphere and easier to get to. I suspect a little downsizing, but much prefer it. Organizer Ryan Carson has his heart set on enabling start-ups, proffering business advice and uniting developers, designers and money folk, though many attendees are not in the start-up category at all. When revealing the results of a survey showing that many web app hopefuls had less then 1000 site visitors a month he shook his head despairingly “you’re never gonna build a business on that kind of traffic”.

Carson has excellent contacts and the day kicked off with Digg’s Kevin Rose on how to get those visitor numbers up – he should know if anyone does. Rose exceeded my expectations with tips on massaging your visitor egos, avoiding analysis paralysis, hanging round event parties to meet influencers even when you can’t afford to attend the event, and even how to hack the press.

After that the day was disappointingly low-key, at least until midday. Then we got Francisco Tolmasky from 280 North and it all changed. Tolmasky’s line is that we should use pure web technology but with the richness of desktop applications, and to enable this he’s put forward cappuccino, a JavaScript framework inspired by Apple’s Objective C and Cocoa – Cappuccino uses Objective-J. This now has a visual development tool (web-based of course) called Atlas, and in Tolmasky’s demo it looked superb. See here for more details.

The surprising twist is that after developers told Tolmasky that they (or their companies) were not willing to trust code to the web, 280 North came up with a desktop version of Atlas with the added ability to create desktop applications as well. I am not clear about all the runtime details, though it no doubt involves webkit, but Tolmasky’s differentiator versus alternatives like Java or Adobe AIR is that Atlas uses only web APIs.

We heard a lot at FOWA about social media, how to use it for marketing, and how to integrate it into applications. Cat Lee from Facebook gave us a breathless presentation on how simple it is to hook into Facebook Connect. It was OK but it was a sales pitch, and that never goes down well at FOWA.

The later afternoon sessions were excellent. Bruce Lawson of Opera gave us an entertaining overview of how HTML 5 would make life easier for developers. There was nothing new here, but nevertheless a revealing moment. He showed some rich media working in HTML 5 and made the comment, jabbing at Adobe Flash and Microsoft Silverlight, that the web was too important to place control in the hands of any one vendor. A loud and spontaneous cheer went up.

This was echoed later when Aza Raskin of Mozilla gave us a browser-centric view of social media, suggesting that the browser could broker our “social graph” by integrating with multiple identity providers. Raskin’s line: social media is too important to be in the hands of any one vendor.

The Guardian’s Chris Thorpe gave a bold presentation about how the Guardian wants to embed itself in the web through its open platform. Like most print media, the Guardian has many challenges around its future business model (disclaimer: I write for the Guardian from time to time); but Thorpe’s presentation shows that his newspaper is coming up with an intelligent response, promoting interaction and building out into the wider web rather than erecting paywalls. Having said that, maybe the Guardian will try other business models too; it is a journey into the unknown.

Overall a day for social media and the open web, and a good antidote to the more vendor-centric conferences at which I often find myself. Next week, for example, it is the Flash-centric Adobe MAX; and having heard very little about Flash at FOWA that will make an interesting contrast.