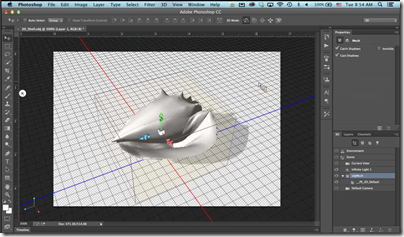 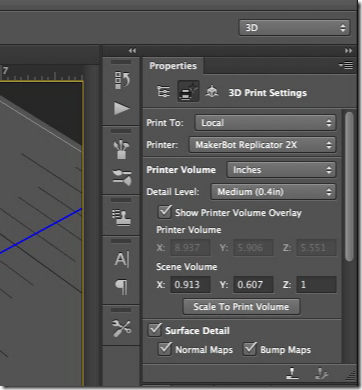 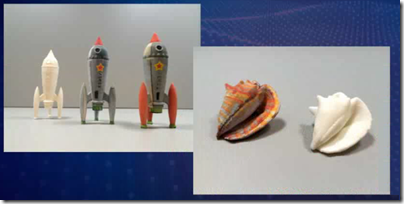 On the second day there was a light-hearted competition. Who can make a spoon faster, a wood carver, or a geek with a 3D printer?

A skilled craftsperson can make a spoon in around half an hour, we learned.

In the other corner was a techie, a laptop computer and a 3D printer.

Said techie (I did not get the name unfortunately) had downloaded a spoon design from the internet and was printing it on a Prusa Mendal RepRap machine. Cost: from a few hundred pounds if you self-assemble, or £1000 or more if you purchase complete.

The software is open source: slic3r to convert a 3D model into printing instructions, and pronterface to talk to the 3D printer.

Looking in more detail at the printer, what you have is a system of cogs, rails and stepper motors that lets a print head move in three dimensions. The raw material is a spool of green plastic from faberdashery. This could be fed from the rotating white spooler at the top of the machine, though in this case only a little was needed and it was floating loose.

The plastic is melted by the print head and squirted out to form the object being printed. Apparently once formed it is reasonably rigid and strong.

Attendees observed that the competition was pretty silly, since speed is not a goal of 3D printing (and the wood carver was indeed the victor). In that sense, 3D printing is a poor way of scaling craft, though it has some potential in that a brilliant design can be reproduced as an object many times over. If you want a lot though, it is worth investing in traditional plastic moulding: setup is expensive, but once you have done one, you can do thousands more cheaply.

Still, imagine what 3D printing enables. I have a nice set of headphones, for example, which are useless because a small plastic component has broken. If I can get hold of (or make) a 3D computer model of the part, I can now make that part for little cost. You do not even need your own 3D printer; services like Shapeways let you upload the design and get the part in the post a few days later.

In niche areas like model trains and landscapes, 3D printing makes models viable even if only a few are needed. You can also have exactly the size you want, rather than being restricted to the standard sizes that are volume manufactured.

For inventors, 3D printing makes prototyping easier. You can iterate through hundreds of slightly different designs and try them out physically, rather than relying on computer models.

The opportunities are fantastic, and you can get started for little cost; though the guy at Monki Gras did note that his RepRap was temperamental and therefore a high maintenance gadget. Maybe by making a few modified parts he can improve it.